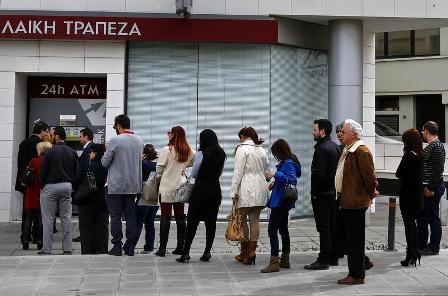 The official lenders will advance 10 bln euros to the stricken state on the basis of a model which shows an 11 pct GDP fall. But private sector analysts have good reasons to predict almost twice that. Cyprus won’t easily get its debt pile to equal its GDP by the 2020 deadline.

People queue up to make transactions at an ATM outside a branch of Laiki Bank in Nicosia March 21, 2013. REUTERS/Yannis Behrakis

Cyprus needs to reach a primary surplus of 4 percent of GDP in its budget from 2017 to enable its public debt to fall, Reuters reported on April 2.
According to a memorandum of understanding between Nicosia and providers of its 10 billion euro bailout - the International Monetary Fund, European Central Bank and European Commission - Cyprus will have a primary deficit of 2.4 percent of GDP in 2013, 4.25 percent in 2014, and 2.1 percent in 2015. It will then have a surplus of 1.2 percent in 2016, and 4 percent in 2017.
Cyprus will freeze public sector pensions, raise the retirement age, excise duties on alcohol, tobacco and petrol, increase value added tax, corporate tax and the tax on interest earnings and dividends.
The measures are designed to bring Cyprus’s debt to GDP level down to around 100 percent in 2020.