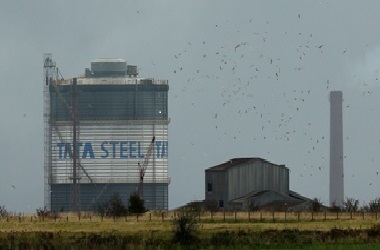 It’s getting closer to crunch time for Tata Steel. The Indian steelmaker has just taken another $1.3 billion write-down on its European division, which is now bleeding cash with every extra tonne it produces. With no end in sight to the flood of cheap steel from China, the pressure is building on Tata to make tough choices about the future of the ailing Anglo-Dutch unit it bought in 2007.

Tata’s third big impairment charge in as many years means it has now written off $3.7 billion against the business since 2013. The company says the carrying value of the UK division has been practically wiped out. What worth remains is mostly attached to its healthier operations in the Netherlands.

Tata’s problems are made even more pressing because it can’t cut costs fast enough to keep up with falling prices. At the EBITDA level, Tata’s European business lost roughly $11 on each tonne of steel it sold during the second quarter. By comparison, its domestic Indian operations produce positive EBITDA of around $121 per tonne.

The cash drain just adds to Tata’s financial burden. Liabilities already exceed the value of the assets at the European business, which accounts for around two thirds of the group’s $10.1 billion of net debt at the end of September. A refinancing last year with less restrictive covenants provides some breathing room. But the more debt that piles up, the more unpalatable its options become.

Tata has already cut 2,000 jobs and is struggling to find a buyer for its long products division in the United Kingdom, which it may now have to sell off in bits or as part of a management buyout. It must also weigh the benefits of keeping the rest of the loss-making UK business, which is also burdened by a big pension deficit. The country’s second-largest steelmaker, Thai-owned SSI UK, went into liquidation last month.

The best hope for Tata is that the European Union heeds its cry and applies more trade measures to protect the steel industry. As long as that doesn’t happen, Tata is hurtling closer to D-day.

Tata Steel said on Nov. 5 that its second quarter net profit rose 22 percent after it sold stakes in some listed companies.

Europe’s second largest steelmaker generated net profit of 15.3 billion rupees ($232.9 million) up from 12.5 billion in the same quarter a year earlier. Earnings were helped by a sale of around half of its shareholding in Tata Motors.

Tata Steel took a significant non-cash impairment charge on its UK business which together with restructuring charges and other provisions amounted to 86.7 billion rupees during the quarter.

Shares in Tata Steel closed down 4.3 percent on Nov.5. The stock has fallen 44 percent in the year to date.