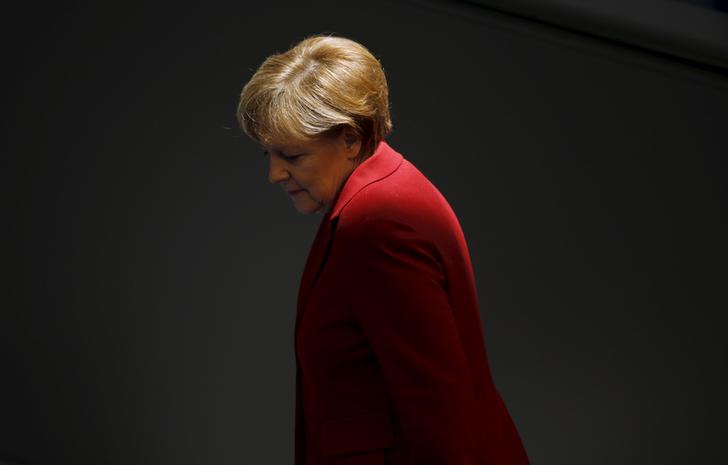 Germany’s gravity-defying economic performance is appearing increasingly shaky. Falling industrial production and orders, paired with weak exports and sagging retail sales in December, suggest flagging emerging markets are hitting Europe’s largest economy. Chancellor Angela Merkel has ridden out a refugee crisis so far, but if economic weakness is allowed to reach the labour market, her political fate could be in trouble.

The German economy has defied gravity since 2010, managing average annual real GDP growth of 2 percent – significantly above the long-term potential growth rate of around 1 percent estimated by the Bundesbank. The country has created 2 million additional jobs since 2010, and the unemployment rate fell from 8.6 to 6.7 percent. More jobs and rising real wages have fuelled domestic demand.

The virtuous circle was supposed to continue this year. Germany’s government expects 2016 growth of 1.7 percent, the same level as in the previous year – even taking into account a small downward adjustment in January. Yet December’s data is unusually poor, and comes with a marked fall in expectations of German businesses. Citigroup economists see the risk of a “winter recession” with two quarters of negative quarter-on-quarter growth in a row.

Labour markets are where the biggest risk lies. Germany is rattled by the influx of over a million refugees last year. Opinion polls see the right-wing, anti-immigrant Alternative für Deutschland party already at 12 percent. Merkel’s predecessor Gerhard Schroeder found in 2005 that joblessness can sway political fortunes. He was toppled after the number of unemployed surged above 5 million.

Migration is both a risk and a help. Over the next two years, spending on accommodating new arrivals is estimated to equal two-thirds of the total economic stimulus package after the 2009 recession. But beyond that, Merkel’s hands are tied by strict rules forbidding a budget deficit, after factoring in cyclical swings, of more than 0.35 percent of GDP. The coalition treaty, which aims for a balanced budget, further reduces her leeway for voter-soothing economic stimulus without alienating deficit hawks within her party. If the economy darkens further, there may be little choice.

Industrial output fell by 1.2 percent compared with the previous month, after seasonal adjustments, the strongest decline since August 2014, data from the economy ministry showed. The figure fell short of the consensus forecast in a Reuters poll for a 0.4 percent increase.

German Chancellor Angela Merkel attends a debate at the Bundestag, the lower house of parliament, in Berlin, Germany in this March 19, 2015.

Industrial output fell by 1.2 percent compared with the previous month, after seasonal adjustments, the strongest decline since August 2014, data from the economy ministry showed. The figure fell short of the consensus forecast in a Reuters poll for a 0.4 percent increase.