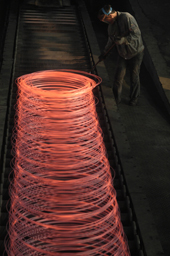 Manufacturing in China is alive and well. Sneaker maker Adidas’ decision to close its last factory in the country last July raised concerns about whether “Made in China” still made economic sense. Yet while it’s true that companies are feeling the pinch from rising wages, lower commodity prices and the stalling yuan are helping those that can use automation to keep costs down.

Three factors have been pushing up the cost of making things in China. First, labour costs have risen double-digit rates for several years: the average wage for migrant workers rose by 15 percent in the first six months of 2012, official figures show.  Second, Chinese demand pushed up commodity prices.  Finally, the stronger yuan, which has risen by 3-5 percent a year since 2005, has lifted the cost of Chinese exports.

Yet China’s weakening economy has reversed two of those three trends.  Producer price inflation has turned negative: prices at the factory gate were down 2.9 percent in July, compared to a positive figure of 7.5 percent a year earlier. As consumer prices are still going up – they rose 1.8 percent in July – corporate margins are improving. Transfarchem, which produces dying agents, managed to expand its margins in the first half despite weaker demand from clothing makers and higher wages. Lower input costs have also helped the likes of noodle and beverage maker Tingyi and hypermarket chain Sun Art Retail Group to report higher profits and better margins.

Moreover, the yuan has stopped rising. The Chinese currency has fallen almost 1 percent against the U.S. dollar this year. This is a welcoming change for exporters in China. Luggage maker Samsonite cited a weaker yuan and lower plastics prices for its profit rise.

Of course, China’s slowdown is hardly welcome: corporate earnings are down across the board. But it has benefits: local governments, which had increasingly been turning up their noses at low-tech factories, have become less picky, according to Samsonite. Although wage pressure shows little sign of abating, companies that can use automation to contain costs still have a lot to gain from manufacturing in China.

A labourer works with heated metal at a steel and iron factory in China.

Samsonite International on Aug. 28 posted net income growth of 32 percent in the first half, while its adjusted EBITDA margin expanded slightly.
Chairman Tim Parker said in an interview that Samsonite faces little cost pressure from China, as raw material prices are falling, the yuan has started to depreciate, and local governments have become more accommodating to foreign investors.
China’s biggest hypermarket chain, Sun Art Retail Group Ltd, said on Aug. 28 its first-half net profit rose 75 percent, beating forecasts, on stronger margins as food price inflation has slowed.
Hong Kong-listed Tingyi, owner of the Master Kong food brand and a partner of PepsiCo in China, said on Aug. 20 its first-half profit rose 24 percent year on year to $284 million, helped by lower raw material prices such as palm oil and sugar.
German sporting goods maker Adidas said in July it will close its 160-worker factory in Suzhou at the end of October. The company said it will source its products from other local Chinese manufacturers.