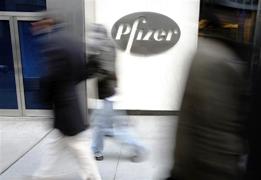 Pfizer’s $160 billion deal to buy Allergan deal will lower the drug producer’s taxes, add solid assets such as Botox and reduce leverage. But it has also triggered a material adverse event. Pfizer is delaying a decision on whether to split the company by two years until 2018.

Past mega-acquisitions haven’t been great for the $200 billion Pfizer’s shareholders. In the decade preceding Ian Read’s 2010 appointment as chief executive, the company spent $220 billion swallowing rivals. The shares halved in value during that period. Read tackled the sprawl, and a series of disposals helped Pfizer’s stock price to double in four years. Part of the investor excitement has been the prospect of a split.

The company has spent more than $300 million since 2011 in preparation. The idea is that Global Innovative Pharma or GIP – a group of businesses set to record about $27 billion in sales this year – would sell newer drugs and vaccines, attracting a higher valuation multiple from growth-hungry investors.

Meanwhile, Global Established Pharma (GEP), with perhaps $21 billion in revenue, would encompass older drugs that have lost or may soon lose patent protection. The low-growth cash cow would appeal to a different type of investor.

Most of Allergan’s $16 billion in sales would fit within GIP. The resulting stronger sales, growth and margins could eventually mean a split is more successful. Pfizer, with its aging drugs, trades at 14 times earnings. Rivals with sexier stories, such as cancer-focused Bristol-Myers Squibb, has a multiple more than twice as high.

For now, though, Pfizer says its focus must be on integrating Allergan. Pushing back the decision on a split means the earliest it could actually happen is 2019. To be fair, the company had to reorganize and gather three years of financial statements in readiness, so it hasn’t wasted that much time so far.

But eight years is a long time for a plan to come to fruition. Pfizer’s deal with Allergan shows it can act quickly. The goal in 2014, after all, was to buy AstraZeneca. The delay in the split decision suggests Read and his directors are hardly burning with desire for a breakup.

Pfizer said on Nov. 23 that it had agreed to buy Allergan in a deal valued at $160 billion, creating the world’s largest drugmaker. The company also said it will delay a decision on whether to split Pfizer into two businesses until the end of 2018. It had been expected to decide in 2016.

In the planned deal, Pfizer will move its domicile to Ireland, where Allergan is registered, in a so-called “inversion” that would slash its corporate tax rate.