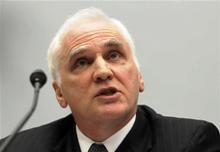 Fed Governor Daniel Tarullo reckons U.S. lenders relying more heavily on funding that can be withdrawn quickly should be forced to hold more capital. The linkage would layer on regulatory complexity, but also practical nuance. A disincentive on hot money could make banks safer.

Daniel Tarullo, a member of the Board of Governors of the United States Federal Reserve. REUTERS/Joshua Roberts

U.S. Federal Reserve Board Governor Daniel Tarullo suggested in a speech on May 3 that short-term funding requirements for banks could be tied to capital levels. One of the major problems during the financial crisis, he said, was that many big banks were too reliant on constantly maturing debt. When uncertainty caused credit markets to dry up, these institutions were unable to roll over their funding and ran into trouble.
The Basel III global capital rules address liquidity, but Tarullo worries the new requirements focus too closely on matching asset and liability maturities. He prefers a system that more broadly limits a firm’s short-term liability exposure. One way to do this, he said, would be to require institutions to have stricter minimum liquidity requirements.
Tarullo also suggested a variation where firms would need to satisfy some liquidity and capital levels, but could dip below the threshold for one metric, while remaining above some minimum floor, if the other metric rises to a significantly higher level.