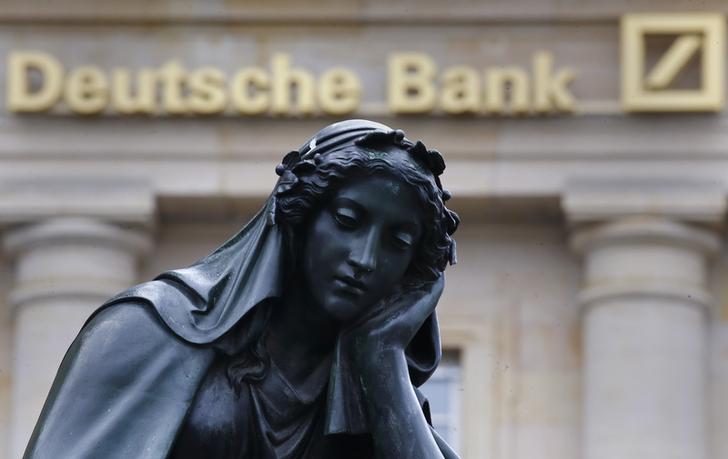 Deutsche Bank’s vast and opaque balance sheet is holding it back. Media reports that the German lender is considering buying back senior debt to boost its balance sheet sent its shares – and those of European peers – soaring on Feb. 10. But Deutsche’s are still down 35 percent since early January.

A close look at Deutsche’s capital position implies the nervousness is overdone. First, consider litigation – the biggest potential danger. Boss John Cryan has 5.5 billion euros of reserves for fines. That should suffice for whatever Deutsche might have to settle this year, unless it has to pay through the nose to settle an investigation into equities trades that may have allowed Russian clients to escape sanctions. Assume a total of 10 billion euros of penalties by 2019, which will create a substantial hit to the bottom line – such penalties are not tax-deductible.

There will be other items affecting earnings and capital. Deutsche has outlined its relevant restructuring costs, as well as the presumed capital benefit from selling its stake in a Chinese lender. And the risk-weighted assets against which banks measure their equity for regulatory purposes would almost certainly increase because of changes to global standards: Morgan Stanley reckons they will rise 12.5 percent between now and the end of 2018.

The upshot: Deutsche would still have a common equity Tier 1 capital ratio of almost 11 percent, based on Breakingviews calculations, even if its earnings were well below the bottom end of analyst estimates. That would almost certainly be below European Central Bank requirements, but it hardly seems terminal.

Cryan needs to provide more disclosure on Deutsche Bank’s balance sheet, though. His bank was conspicuous among European peers in its lack of clarity over oil sector exposure. And Deutsche has an enormous 1.4 trillion euros in leverage assets for regulatory purposes.

A fifth of the balance sheet consists of German mortgage and corporate sector lending – pretty safe, in other words. But almost a third is made up of derivatives and unspecified “other” exposures. The bank may have much of that covered, with 215 billion euros in liquid assets. But it’s in Cryan and Deutsche’s interest to clear the fog.

A statue is seen next to the logo of Germany's Deutsche Bank in Frankfurt, Germany, January 26, 2016.

Deutsche Bank shares rose more than 10 percent on Feb. 10 after media reports that the German lender was considering buying back senior debt to boost its capital position.

The cost of insuring Deutsche Bank’s 10-year debt using credit default swaps fell on Feb. 10 to 223 basis points, from a high this month of 276 bps.

Deutsche said in its fourth-quarter results that its exposure to the energy sector was “‘underweight’ versus the industry and biased towards investment grade or well secured exposures”.