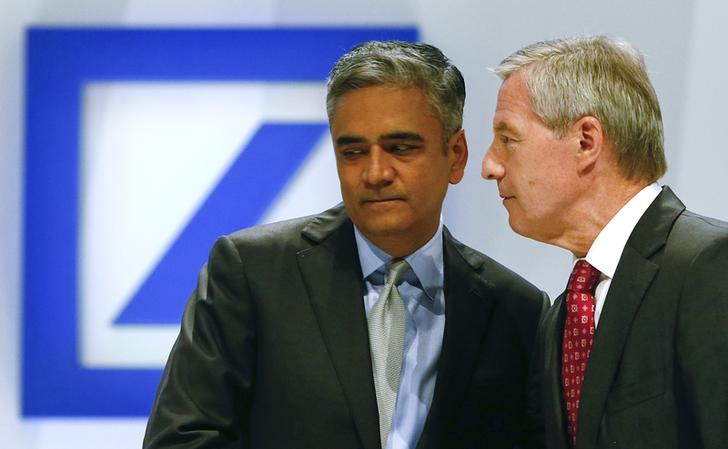 Deutsche Bank is wasting a crisis. In September 2012, newly appointed co-Chief Executives Juergen Fitschen and Anshu Jain said the German lender would be at the forefront of cultural change in the banking industry. That goal keeps moving away from them.

The duo began their project by creating a panel to tie pay more closely to ethics. They also allocated 1 billion euros to boosting controls. But their response to Libor and other scandals that have popped up since will matter more.

While Deutsche received a $980 million fine from the European Commission for being part of a Libor cartel, the demonstration of accountability has been clumsy. Seven individuals have left the firm, but four were reinstated on grounds of wrongful dismissal. No senior figure has fallen on his sword.

Deutsche has also struggled to demonstrate that its own, ongoing, internal investigation into Libor has been sufficiently robust. German watchdog Bafin criticised the probe in a letter sent in August and recently leaked to the media.

Regulatory relations were further strained by the way Deutsche conducted a derivative transaction that contributed to 730 million euros of losses at Italian lender Monte dei Paschi di Siena. The German bank subsequently changed the deal’s accounting after Bafin questioned the original treatment, according to two people familiar with the situation.

Deutsche has not commented on its dealings with Bafin. It says it is fully cooperating with regulators.

Now the difficulties are mounting. Deutsche has just suspended several traders in the context of industry probes into the foreign exchange markets.

Fitschen and Jain’s ability to lead a convincing cultural overhaul is constrained because they were part of the old regime. But it would probably not be in shareholders’ interests to jettison the pair now. The duo has made operational progress; this is a risky time to change leadership at a capital-markets-heavy bank that needs to deleverage. Nor have they been linked to the trading scandals themselves.

Still, Deutsche needs to go further if it wants to be seen as leading the industry in cultural renewal. And it needs to repair relations with Bafin. The continuing forex probe offers a fresh chance for Deutsche to get tough on itself. Forthcoming Libor settlements will provide a pre-text for a management shakeup. These opportunities should not be squandered.

Deutsche Bank has been rocked by a series of leaked letters from its home regulator questioning the rigour and independence of its internal investigation into possible attempts to manipulate Libor.

Finance Ministry spokesman Martin Kotthause said on Jan. 6: “We attach great importance to ensuring that this gets truly cleared up fully and completely,” he said.

Anshu Jain (L) and Juergen Fitschen, Co-chief Executives of Deutsche Bank speak during a shareholders meeting in Frankfurt, May 23, 2013.

Deutsche Bank has been rocked by a series of leaked letters from its home regulator questioning the rigour and independence of its internal investigation into possible attempts to manipulate Libor.

Finance Ministry spokesman Martin Kotthause said on Jan. 6: “We attach great importance to ensuring that this gets truly cleared up fully and completely,” he said.