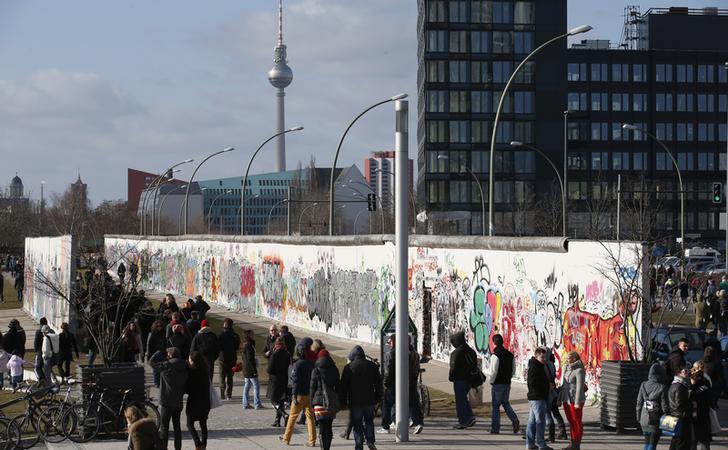 The residential landlord plans to offer 1.75 billion euros in stock for rival GSW Immobilien. This is a bet that Germany’s capital will stay among Europe’s hottest rental markets. A successful deal promises synergies with a respectable net present value of 430 million euros.

People stroll at the open air 0.8-mile painted section of the Berlin Wall known as the "East Side Gallery" in Berlin March 3, 2013. Developers plan to build luxury apartments close to the East Side Gallery.

Deutsche Wohnen, the German residential landlord, announced an all-share, 1.75 billion euro ($2.3 billion) bid for rival GSW on Aug. 20. The bidder plans to offer 51 of its shares for every 20 shares in GSW. Shareholders in the target will own about 43 percent of the combined company.
The bid, which requires acceptance by 75 percent of GSW shareholders, offers a 14.7 percent premium to GSW’s previous closing price of 31.47 euros a share. Deutsche Wohnen plans to launch the offer in October, after a Sept. 30 shareholders’ meeting, and expects the deal to close in the first half of 2014.
The merged group would be focused on the German capital area, with 72 percent of its portfolio located in Berlin and Greater Berlin. Deutsche Wohnen expects the deal to create synergies with a net present value of 430 million euros.
By 0754 GMT on Aug. 20, shares in Deutsche Wohnen stood 2.9 percent lower at 13.745 euros a share. GSW stock rose 8.0 percent to 34.00 euros a share.