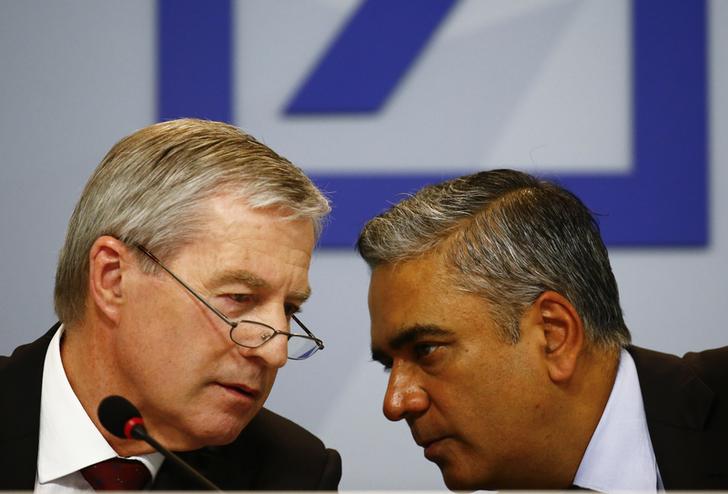 Deutsche Bank’s management reshuffle ratchets up the pressure on co-Chief Executive Anshu Jain. The changes announced on May 20 are largely cosmetic, and will do little to stop investors registering displeasure at Deutsche’s top brass after the bank’s annual meeting late on Thursday. But Jain’s new sole responsibility for strategy makes him directly accountable for much-needed cost cuts.

After three years of chronic underperformance, both co-chief executives are fortunate to have retained their jobs. Since they took over on June 1 2012, Jain and his co-Chief Juergen Fitschen have presided over a 6.6 percent rise in Deutsche’s share price. In that time, the Eurostoxx bank benchmark index has doubled. Deutsche’s stock is actually down 6.5 percent since the duo unveiled their failed “2015+” strategy in September 2012, and 2014 return on equity was 2.7 percent.

The extent of that underperformance is most clearly seen in Deutsche’s inability to reduce costs. Expenses were supposed to be around 65 percent of revenue by the end of this year. Instead, analysts peg them at 84 percent for 2015. Last year they were 87 percent, not much better than the 93 percent recorded in 2012.

Small wonder that shareholder advisers ISS and Hermes EOS have recommended that investors express no-confidence in the bank’s management at the AGM. While German shareholder votes are non-binding, Hermes has even called for fresh faces at the top of the bank. Only Rainer Neske is leaving Deutsche’s eight-strong management board – though that’s hardly a surprise given the retail banking division he ran is the business being hacked back most.

Deutsche kremlinologists may wonder whether the most recent changes are a prelude to a wider revamp by Chairman Paul Achleitner. Former Finance Director Stefan Krause now has responsibility for transactional banking, Deutsche’s best-performing business and its most promising prospect for growing returns. Success there could potentially put him in line for elevation.

There are small signs here that Deutsche is getting to grips with the need for accountability, and Jain could seize his opportunity to deliver change. But investors could be forgiven for considering it too little, too late.

Deutsche Bank on the evening of May 20 reassigned roles for its top executives, putting co-Chief Executive Anshu Jain solely in charge of delivering its new strategy. Retail banking head Rainer Neske will leave the bank on June 30, by mutual consent.

The bank said two other non-management board executives would also leave: Alan Cloete, the bank’s co-chief executive officer of Asia Pacific, and its former global head of finance and foreign exchange operations - the business responsible for Libor submissions; and Colin Grassie, its chief executive in the UK, where local regulators have been especially critical of the bank.

At the bank’s annual meeting on May 21, Jain said that cost cuts would be a top priority in coming years.