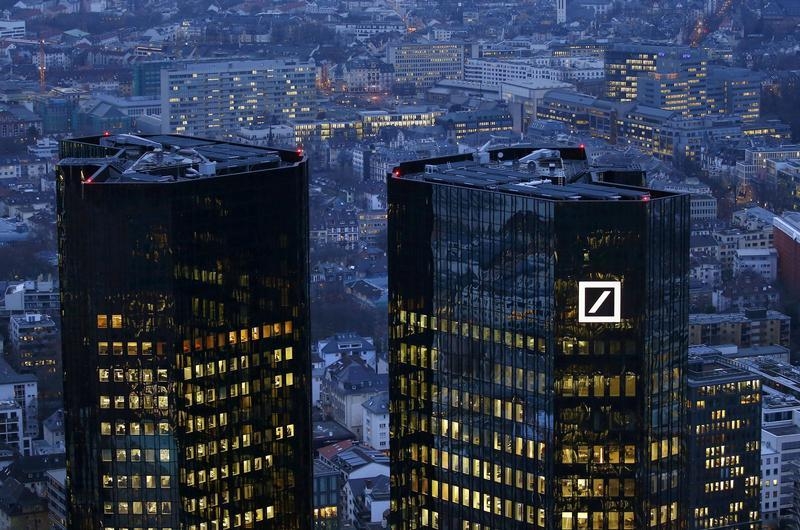 Markets are usually unforgiving to lenders with skimpy capital positions. But Deutsche Bank’s frailty could help it bargain down the U.S. Department of Justice over a potential settlement for charges related to its mortgage securities business.

The Justice Department’s opening salvo of $14 billion, or 12.5 billion euros, could all but sink Deutsche Bank. Germany’s largest lender by assets had legal provisions of 5.5 billion euros at the end of June. But only 4 billion euros of that is earmarked for regulatory enforcement, which includes supposed sanctions-busting trades by Russians as well as other cases.

Suppose Deutsche Bank has salted away 3 billion euros for this settlement with the U.S. government. If it paid as much as the DOJ has proposed, its Tier 1 common equity (CET1) capital as a proportion of risk-weighted assets could fall below 9 percent – a perilously low level given changes in regulations are set to erode all banks’ CET1 ratios.

Like peers, the German bank may be able to haggle with U.S. authorities. Citigroup paid $7 billion to settle a host of mortgage-related charges, though the DOJ had first sought $12 billion, according to Reuters. JPMorgan paid $13 billion, but secured a big discount, says a person familiar with the matter. And Deutsche itself paid $1.9 billion to settle a separate civil case over mortgage securities in 2013.

The DOJ may try to play hardball. Many regulators believe Deutsche Bank to be among the worst of the offenders, involved in almost every industry scandal as well as several idiosyncratic ones. It has also been slow to bring its compliance up to scratch.

But Chief Executive John Cryan’s steadfast refusal to raise equity could, in the end, bolster the bank’s negotiating position. A fine of much more than $7.5 billion would push Deutsche Bank’s CET1 ratio below the psychologically important threshold of 10 percent, on Breakingviews calculations. That could spark market alarm given that the International Monetary Fund reckons Deutsche is the world’s most systemically risky bank.

A big, painful penalty may well be in the offing. But when it comes to negotiating over the final bill, Deutsche Bank’s weakness could actually be a strength.

Deutsche Bank said on Sept. 15 that it had no intention of paying anywhere close to the $14 billion (12.5 billion euros) figure that the U.S. Department of Justice had proposed for the lender to settle civil claims related to its past issuance, underwriting and securitisation of residential mortgage-backed securities.

U.S. media had earlier reported the $14 billion figure as the DOJ's opening position in its discussions with Deutsche Bank.

"The negotiations are only just beginning. The bank expects that they will lead to an outcome similar to those of peer banks which have settled at materially lower amounts," Deutsche Bank said in a statement.

As of June 30, Deutsche Bank had a total of 5.5 billion euros ($6.2 billion) in legal reserves to cover all its outstanding litigation.