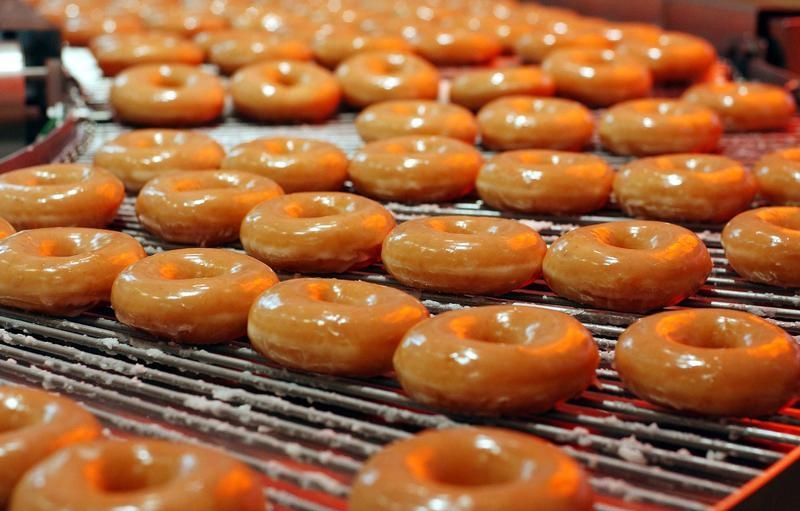 Digesting Krispy Kreme Doughnuts may require more sweetener. JAB Holding has baked a 25 percent premium into its $1.4 billion offer to take the U.S. doughnut chain private. The billionaire-backed owner of Keurig Green Mountain, Peet’s Coffee & Tea and other coffee brands should be able to boost sales and margins. But Krispy Kreme may prove too appetizing for others to pass up without a fight.

The fried-dough merchant is a natural fit for JAB. The company, backed by Germany’s billionaire Reimann family, controls one of the world’s biggest packaged-coffee businesses through its 51 percent stake in Jacobs Douwe Egberts. It is also a giant in single-serve coffee thanks to its $14 billion purchase of Keurig last year.

Selling JAB’s java through Krispy Kreme outlets could give the doughnut maker’s sales and margins a needed jolt. Selling cups of joe is more profitable than hawking glazed goods, yet only makes up about 5 percent of Krispy Kreme sales. Beverages at arch-rival Dunkin’ Brands account for around 60 percent of revenue. Krispy Kreme also has a higher percentage of company-owned stores than some competitors. These are less profitable than franchised restaurants.

Krispy Kreme’s financial ingredients make for an operating margin of just 10 percent compared with nearly 40 percent at Dunkin’. That helps explain why Krispy’s shares trade at just over 18 times expected earnings over the next 12 months, while Dunkin’ and other fast-food competitors tracked by Thomson Reuters trade on an average of closer to 23 times.

JAB’s $21-per-share offer would only just close that gap. Covering the $280 million premium JAB is offering just through cost savings would require immediately frying $46 million – or 11 percent – of Krispy Kreme’s annual direct operating expenses, using the company’s 40 percent effective tax rate and a multiple of 10 times earnings. Rivals or even private-equity firms may reckon they could take out a bigger bite than that – and they’d get their hands on an iconic brand with no net debt and a clear path to higher margins.

That may still leave JAB at the front of the line. It is one of those rare deals where there is real potential to boost revenue both at home and by speeding international expansion under the JAB umbrella. That means the deep-pocketed acquirer should be able to inject more jam into its offer.

Krispy Kreme Doughnuts on May 9 said it had agreed to be taken private by a unit of JAB Holding, the billionaire-backed investment company that also owns the Keurig Green Mountain and Peet’s Coffee & Tea coffee brands, for $1.4 billion in cash. The $21-a-share offer represents a premium of about 25 percent to the value of Krispy Kreme shares at the close of trading on May 6. The deal is subject to approval by Krispy Kreme shareholders.