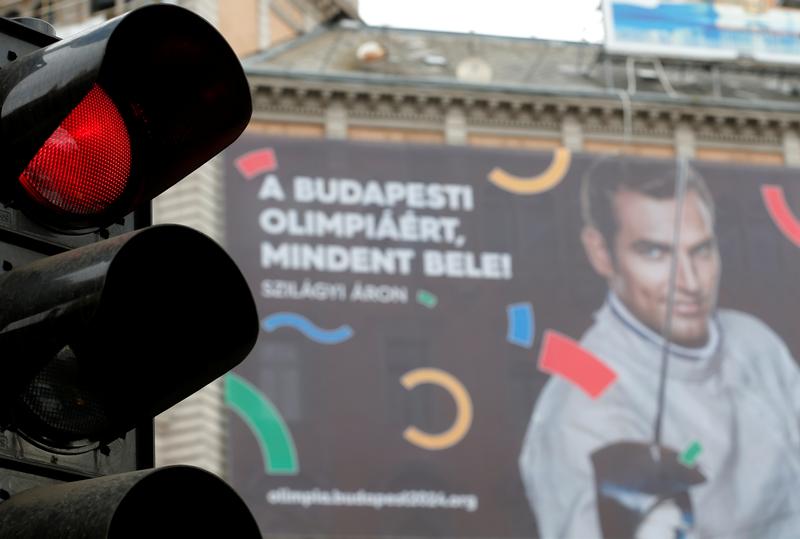 Budapest saw the light and became the fourth city to drop its bid for the 2024 Summer Games, leaving only Los Angeles and Paris in the race. With the ranks of potential hosts getting exhausted, one good way to save the global athletic fest would be to cut events back to basics.

Traffic lights switch to red in front of a Hungarian pro-Olympics billboard with two-times sabre fencing Olympic champion Aron Szilagyi advertising the Games, billboard saying "Give it all for the Budapest Olympics" in central Budapest, Hungary, February 23, 2017. REUTERS/Laszlo Balogh

The Hungarian government said on Feb. 22 it was withdrawing its bid to have Budapest host the 2024 Summer Olympic Games, citing a lack of political unity to support the effort. The decision came after opponents obtained enough signatures to force a referendum on the issue.

Boston, Hamburg and Rome also have pulled their candidacies over the past 19 months because of political opposition and fears of cost overruns.

Updated bids released earlier this month by the two remaining candidates, Los Angeles and Paris, showed escalating cost projections. The California city is budgeting $6.2 billion to stage the 17-day event while Paris estimates its cost at $4.3 billion. The International Olympic Committee is scheduled to pick the winner at a meeting in Lima, Peru, in September.