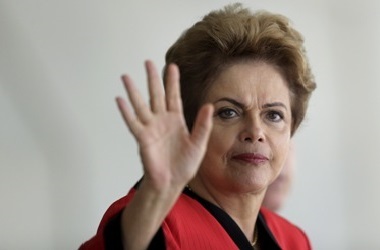 Many Brazilians want to impeach President Rousseff, unpopular due to an ailing economy and corruption scandals. But any bid by lawmakers to oust her would raise political uncertainty, discouraging investors. Finding a way to get along would be a smarter option.

Brazil's President Dilma Rousseff gestures during a Summit of Heads of State of MERCOSUR and Associated States and 44th Meeting of the Common Market Council in Brasilia, July 17 2015. REUTERS/Ueslei Marcelino

Brazilian President Dilma Rousseff said on Aug. 12 that she would not consider quitting despite calls for her impeachment from opponents in Congress as the economy sinks and her popularity hits record lows.

Rousseff, now seven months into her second term, has suffered a rash of defeats in Congress. These have complicated efforts to rebalance public accounts to avoid losing Brazil’s investment-grade rating.

Some of her opponents have said Rousseff should step down due to allegations of illegal campaign financing and attempts to doctor the national budget last year. A nationwide demonstration is scheduled for Aug. 16 calling for her impeachment.