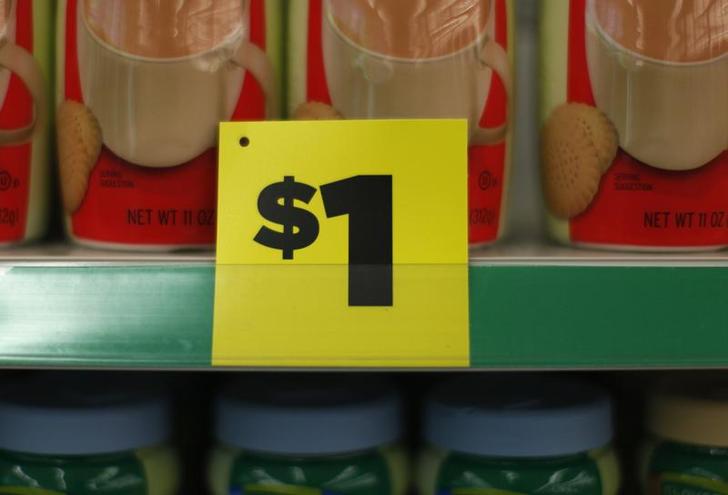 Dollar store mergers, it turns out, don’t come cheap. Dollar General – call it General – on Monday joined the fight for rival U.S. discount retailer Family Dollar with a $9.7 billion cash offer. That topped an earlier agreed acquisition of Family by the smaller Dollar Tree, which as wags have noted could result in a combination called Family Tree. Even above General’s $78.50 a share bid, though, both of Family’s suitors have room to lob in a few more singles.

Dollar Tree’s deal was at $74.50 a share, denominated partly in shares. Aside from offering all cash and a bigger, 29 percent premium to Family’s undisturbed share price, General may be a better fit with Family as both companies offer goods at various prices whereas Tree sticks with items that actually sell for $1 or less.

Both acquirers may have left value on the table – so far. General expects up to $600 million of annual synergies by the third year after a deal. Cut that to $500 million to home in on cost cuts rather than more nebulous revenue gains, and the savings could be worth approaching $2.9 billion in present value terms after tax. That implies General could in theory afford to pay nearly $86 per share for Family before it starts to destroy value for its shareholders.

But if Family ends up with General, it will have to hand Tree a break fee of $305 million, or $2.68 per Family share. That may hold General back from shelling out top dollar.

Tree can also probably dig deeper. Its initial synergy target of $300 million a year is low at just 1.6 percent of combined revenue. Bump the figure up to $400 million, and an $81 per share counterbid is plausible. Since there’d be no termination fee, that’s probably closer to General’s actual ceiling than it looks.

For now Dollar General’s all-cash offer has the edge. Rick Dreiling, the retailer’s chief executive, has even agreed to postpone retirement to see a deal through. Dollar Tree may, however, also have a few more bucks up its sleeve if it hopes to clinch a deal.

A price sign is displayed at a Dollar General store in Arvada, Colorado

Dollar General on Aug. 18 announced a $78.50 per share offer for rival discount retailer Family Dollar. The all-cash bid came three weeks after smaller peer Dollar Tree offered $74.50 per share in cash and shares. Dollar General said its bid was worth about $9.7 billion including debt.

Dollar General said it expected the deal to generate $550 million to $600 million of synergies within three years of closing.