Do as I say 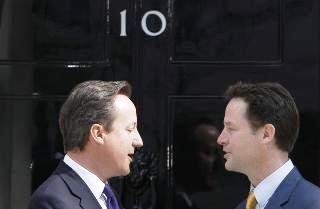 The UK government is suddenly struggling with the politics of austerity. Its moral authority to force through painful spending cuts, already undermined by a poorly-presented budget, has now been rocked by a political funding scandal.

It’s hard to fault the Conservative-led coalition’s economic policies. While bond yields are rising, the market’s relative hunger for British gilts remains strong. Last week’s Budget amounted to little more than tinkering with an existing deficit-reducing formula. Public-sector opposition to cuts has been less severe than many anticipated when the government took office in 2010.

Yet in spite of making only small changes in economic policy, the coalition is suddenly getting it in the neck. A freeze on special tax allowances for pensioners was predictably attacked as a tax increase for the most vulnerable, rather than the simplification it was presented as. Combined with a phased reduction in the top rate of tax for the highest earners, the move blew the credibility of chancellor George Osborne’s claim that “we are all in this together”.

Now those who accuse his party of being in hock to the wealthy have found their smoking gun – a newspaper expose of the Conservative treasurer boasting that big donations will be rewarded with high-level access and the chance, in effect, to set the policy agenda.

It’s not clear how much damage the funding scandal might wreak. Prime Minister David Cameron’s coalition partners, the Liberal Democrats, will enjoy his discomfort but have little to gain from a government collapse. The opposition Labour party will make hay, but its authority on matters of party funding is weakened by the influence of trade unions on its own finances – and by memories of the “cash for honours” scandal that tainted the final years of Tony Blair’s premiership.

But investors shouldn’t brush off the developments. Given the size of the UK’s debt, currently 63 percent of GDP, and this year’s projected deficit of 8 percent of GDP, the government cannot afford to make its job any harder. The administration seemed to have convinced the public that there was no alternative to its aggressive cuts agenda. That may be true economically. But events of the last week are a reminder that the economics can work only if the politics are right too.

British Prime Minister David Cameron pledged on March 25 to investigate why a senior Conservative party fundraiser offered exclusive access to him in return for donations of 250,000 pounds ($400,000) a year, following an investigation by the Sunday Times newspaper.
Cameron was under mounting pressure on March 26 to reveal the indentities of party donors entertained at Downing Street.

British Prime Minister David Cameron pledged on March 25 to investigate why a senior Conservative party fundraiser offered exclusive access to him in return for donations of 250,000 pounds ($400,000) a year, following an investigation by the Sunday Times newspaper.
Cameron was under mounting pressure on March 26 to reveal the indentities of party donors entertained at Downing Street.