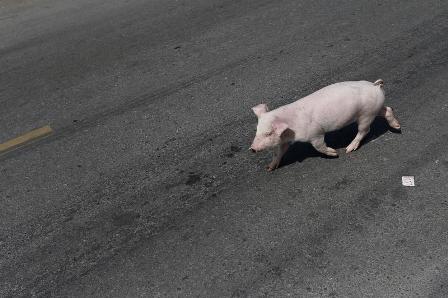 China has been rearing pigs for at least 6,000 years. Now its biggest pork producer is paying $4.7 billion to import them from the United States. What explains the reversal? It’s not just that richer consumers demand more meat, but that poor decisions by China’s planners have created a double arbitrage.

Shuanghui is paying a premium of more than $1.1 billion to acquire Smithfield, based on the U.S. company’s closing share price on May 28. As the takeover is unlikely to generate much in the way of cost savings, China’s biggest pork producer is relying on being able to sell more U.S. pork to Chinese consumers.

Two oddities in China’s market make that profitable. First, imported pork is cheaper than locally sourced meat. China is dependent on foreign markets for pig feed such as soybeans, which are becoming more expensive. That makes its industry structurally more costly than U.S. pig farms.

Smithfield says that, accounting for changes to the U.S. corn market, it should be able to produce live hogs for $1.37 a kilo. That compares with recent prices in China of more than $2.10 a kilo.

Second, meat reared in the United States is likely to command a premium among affluent Chinese shoppers weary of pork-related food scares. Fluorescent, drug-infused and otherwise suspect pork, rather than a scarcity of local pigs, will push up demand. Smithfield recently estimated imports will grow to 4 percent of China’s consumption, from around 1 percent today.

The U.S. cost advantage should endure as long as China continues to pursue near self-sufficiency in pork. Scarce land is ill-suited to growing the grains on which pigs are fed, and the farming system is inefficient. Around a third of pig farms are still small in scale, according to the U.S. Department of Agriculture, and the supply chain starved of investment.

The premium for foreign goods may be less engrained. The parent company of computer maker Lenovo and internet group Netease are among those who have been dabbling in domestic agriculture, spying potential profit from higher standards. If Shuanghui can make a big mark-up by selling U.S.-badged pork, it may lure more capital still. Consumer trust isn’t rebuilt overnight, but a deal justified by China’s bad old decisions may help to encourage some good new ones.

A pig breaks out of a swinery before being sold on a street in Zhulin county of Jiaxing, Zhejiang province March 15, 2013.

Shuanghui International agreed to buy Smithfield Foods for $4.7 billion, or $34 per share, on May 29. The Chinese pork producer is paying a 31 percent premium based on the May 28 closing price of Smithfield’s stock, and will assume $2.4 billion of debt as part of the deal.
China is on course to consume 53.1 million tons of pork in 2013, the U.S. Department of Agriculture forecast in September 2012. It expected imports for the year to total 840,000 tons. Smithfield produced 6.5 billion pounds, equivalent to 2.9 million metric tons, of fresh and packaged pork in 2012.
China’s live hog prices are around $2.10 per kilogram. Smithfield indicated in an investor presentation in April that based on changes to the supply of feed, its own normalised price for live hogs would be as low as $62 per hundredweight, equivalent to $1.37 per kilogram.