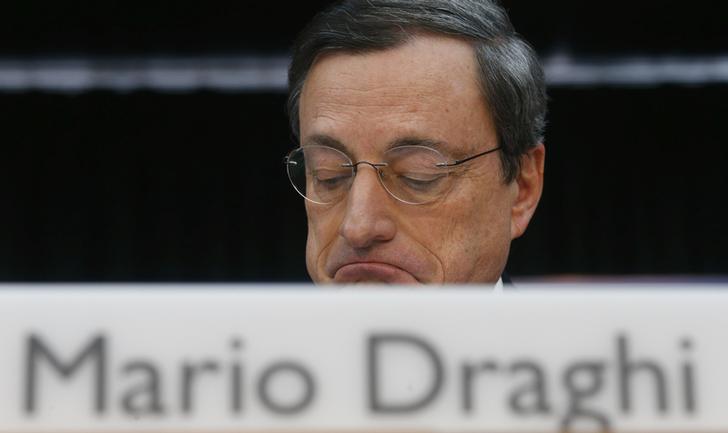 It is the stuff of dreams for President Mario Draghi. The European Central Bank chief can only fantasise about pushing through policy decisions with a one-vote majority, as Bank of Japan Governor Haruhiko Kuroda did on Friday. The euro zone economy is the poorer for his inability.

The ECB doesn’t disclose any voting patterns. But if the news conferences held after policy meetings are anything to go by, euro zone realpolitik requires a goodly majority of its members to back any action. Draghi’s descriptions of the balance of votes have ranged from unanimity, through “overwhelming” and “significant majority” to “comfortable majority.” The BOJ’s 5-4 vote in favour of ramping up its government bond purchases would be much too uncomfortable for the ECB.

Part of the problem is that the ECB’s actions are still viewed through the optic of nationalism, and some nations count more than others. It is huge news if a German central banker is overruled. It would barely register if a Cypriot were left to sulk.

True, Germany is Europe’s biggest economy and it might seem understandable that the views of its central bankers matter more in practice than they do in the central bank’s charter. However, ECB policymakers are supposed to be politically independent, to rise above national considerations and to focus only on what is good for the euro zone as a whole. That noble mission is often ambushed by realpolitik.

The ECB is probably as split as the BOJ in how far it should go in its efforts to boost inflation, which was just 0.4 percent in October in the euro zone. But the ECB is not supposed to be allowed to buy government debt directly. That prohibition is taken very seriously in some countries, including Germany. Changing the rule is well-nigh unimaginable.

So Draghi is left to broker convoluted compromises or to wait until the economic situation is so dire that he can win over a healthy majority.

It is far from clear whether the BOJ’s actions will buoy inflation and economic activity. But the ECB’s many constraints definitely won’t help.

The Bank of Japan unexpectedly voted on Oct. 31 to accelerate its purchases of Japanese government bonds so that its holdings increase at an annual pace of 80 trillion yen, up by 30 trillion yen. The vote was split 5-4.

The Bank of Japan unexpectedly voted on Oct. 31 to accelerate its purchases of Japanese government bonds so that its holdings increase at an annual pace of 80 trillion yen, up by 30 trillion yen. The vote was split 5-4.