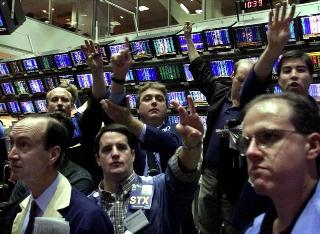 Settlements by three firms – Barclays, UBS and Royal Bank of Scotland – have each contained disclosures of the culture of the trading floor, via recorded Bloomberg messages. One RBS trader referred to his readiness to raise and lower his requests for the Libor rate as being akin to a “whores drawers”. Another offered to “come over there and make love to you” in return for helpful rate submissions. Yet another quipped: “[It’s] just amazing how libor fixing can make you that much money.”

This comes after previous Libor settlements showed corrupt bankers basking in superhero analogies, or dreaming that shipments of champagne and yachts would be the fruit of Libor’s ill-gotten gains.

Each settlement just compounds the pain for the rest of the industry. RBS was the latest to pay fines and agree sanctions on Feb. 6, but other banks will follow. Some bankers have had enough of the embarrassment, which further erodes confidence in an already disgraced sector. UBS Chairman Axel Weber, whose bank has already fessed up, proposed on Jan. 25 that banks end the humiliation through an industry-wide settlement.

Collective agreements like this sometimes help industries iron out future civil suits. Tobacco companies, for example, have benefited in the past from sticking together. But it’s not clear that it would achieve much in the case of Libor, given the relatively victimless nature of the crime in individual financial terms. The main benefit of an industry-wide agreement would simply be to end the embarrassment.

But the Libor pantomimes are serving to remind the public how routinely and regularly banks misbehaved. Singling out firms has given society redress and catharsis at a national level, too, like a modern day equivalent of the village stocks. The sustained pain will make it harder for banks to treat the consequences of bad behaviour as just a cost of doing business. The Libor scandal may have a prurient fascination for the financial media. But settlements spread out over time help society hold bankers to account.

Royal Bank of Scotland on Feb. 6 agreed to pay $612 million in fines to U.S. and British authorities and pleaded guilty to wire fraud in Japan to settle allegations it manipulated the London interbank offered rate.
UBS Chairman Axel Weber raised the possibility of an industry-wide settlement for the rest of the banks involved in the Libor rate fixing scandal at a meeting of top bankers in Switzerland’s Davos on Jan. 25, Reuters reported.