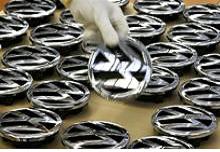 Skoda cars and MAN trucks, meet your potential Volkswagen stablemates: 186-mph superbikes. No-one walks into a showroom after a cheap family car and screeches out on a blood-red Italian motorcycle. But Audi’s ambitions to buy Ducati would make some sense for VW’s luxury marque. And even with an appropriately macho price tag, the deal could pay off if Audi turbo-charges Ducati sales in emerging markets.

Motorbike valuations are in a different league to the big automakers. A deal at 875 million euros, the high end of earlier reports, would value Ducati at more than 1.8 times 2011 sales and 9.3 times EBITDA. That’s below U.S. peer Harley-Davidson, which fetches 3.1 times sales. But it’s far above VW itself, which trades at just 0.3 trailing sales and 5.5 times EBITDA.

Nor are there big cost savings. Maybe some engine know-how can be shared, and Ducati should be able to buy raw materials and borrow money more cheaply, among other things. But Audi clearly can’t reap the huge savings that come from combining carmakers – where similar-size vehicles can be built using common platforms, engines and parts. Still, Audi might persuade some dealers to stock both two- and four-wheelers, as happens with arch-rival BMW.

The sale could yet fizzle out. Ducati’s main owner, Italy’s Investindustrial, now says talks with VW are no longer exclusive, which doesn’t sound promising. But any successful deal would be tiddling for Europe’s largest carmaker, whose operating profit hit 11.3 billion euros last year.

And perhaps Ducati’s celeb-endorsed bikes are best understood as a leather-clad version of all the other luxury brands that are storming the emerging world. In that case, VW’s experience, connections and marketing nous could be a big help. In China, for example, VW is among the biggest foreign players. Audi sold a record 90,000 cars there last quarter. Ducati’s Asian sales leapt 75 percent last year, but were still just 11 percent of the total.

Volkswagen boss Ferdinand Piech may be thinking like a petrol-head as much as a financier. But most of VW’s stock is held by Porsche, Lower Saxony and Qatar. And his remaining outside investors are already accustomed to empire-building.

A Volkswagen logo sign is seen inside the lobby of the U.S. headquarters building of Volkswagen Group of America in Herndon, Virginia, (REUTERS/Larry Downing)

Audi, the German luxury carmaker, plans to announce the acquisition of Italian motorcycle manufacturer Ducati as early as April 18, Reuters reported on April 11, citing two people familiar with the matter. Last month Reuters reported Audi was on the brink of paying 870 to 875 million euros for Ducati.
Volkswagen, Europe’s biggest carmaker and Audi’s parent company, holds its annual shareholders’ meeting on April 19. Ducati is majority owned by Investindustrial, the Italian private equity firm.
On April 16, Investindustrial’s head Andrea Bonomi told reporters this was an important week for the sale, although talks with VW were no longer exclusive.
Volkswagen’s current stable also includes carmakers Lamborghini, Skoda, Seat, Bentley, and Bugatti, and truckmakers MAN and Scania. A botched 2009 takeover attempt by Porsche has left the sports car maker’s holding company, Porsche Automobil Holding SE, with a majority of VW’s shares, while VW in turn owns 49.9 of Porsche’s car-making business. The duo are still talking about how VW can acquire the remainder of that business before 2014, while avoiding triggering a tax bill that could total 1 billion euros.