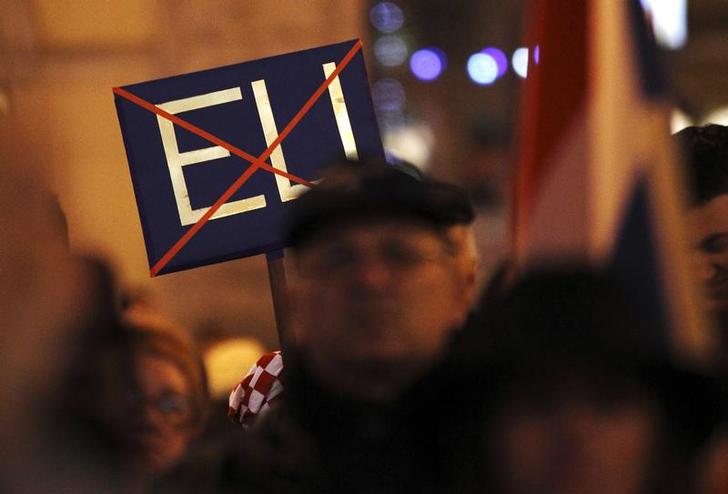 No, HSBC is not going to change its name to Duesseldorf Financial. It isn’t even seriously contemplating taking its European operations to the provincial Westphalian city, despite a stray comment by Andreas Schmitz, chairman of HSBC’s German operations.

Schmitz was answering a question about where HSBC would put its European headquarters if the UK left the European Union. He was not speaking for HSBC, the bank made clear, and he may have been kidding. Still, humour can bring out painful truths. In this case, the potential pain is London’s. The still-British bank has already considered moving its global headquarters from London to Asia.

Duesseldorf is a nice enough place, but carries unfortunate financial associations. It is the home of IKB, wrecked by its purchases of overpriced U.S. mortgage securities. It was the home of WestLB, disbanded after stumbling from crisis to crisis.

With HSBC, the British government would do what it could to keep the bank’s regional base in the same country as its biggest retail operations. But even if HSBC stays put, a British exit from the EU would give the region’s secondary centres of finance better chances to nibble away at London’s current dominant position.

How? Chiefly, through regulation. The European Central Bank is already a more powerful supervisor than the Bank of England. Banks and other financial firms will want to stay close to these authorities and please them. That means creating more jobs in Frankfurt, Berlin, Paris and, yes, Duesseldorf. These cities’ gains will be London’s relative loss.

It will be a long while before London joins Florence and Antwerp on the list of formerly important European financial centres. Still, London lost what might be termed its natural right to financial leadership when the British Empire ceased to be. The UK is no longer a global leader in trade or international diplomacy, and its currency is in the second tier. If British voters spurn Europe, London’s financial strength will also leach away to the Continent.

Paragraph 3 has been updated to correct the current condition of WestLB.

Andreas Schmitz, chairman of the supervisory board of HSBC’s German operation and a member of the board of directors of German bank lobbying group BdB, discussed at a conference last week what would happen if the UK voted to leave the European Union, Bloomberg reported. He said HSBC could move its European headquarters from London to Duesseldorf.

Schmitz was said to be speaking “in his capacity as a senior member of the German Bankers Association, not on behalf of HSBC,” according to a spokesperson for the bank. “His views do not reflect those of HSBC.”