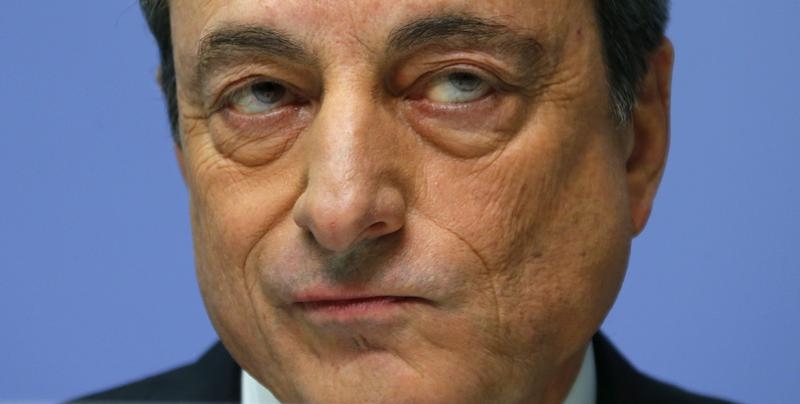 The European Central Bank is getting ready to sour QE in order to keep Germany sweet. The central bank will almost certainly buy sovereign debt next year in an attempt to improve the eurozone’s misfiring economy. But securing German approval could leave its bazooka underpowered.

The ECB’s plan to defeat low inflation and weak growth involves growing its balance sheet to 3 trillion euros in order to suppress yields, weaken the currency and, it hopes, stimulate growth. But buying sovereign debt, which looks like the only way to hit its balance sheet target, raises hackles in Germany. Berlin worries about turning monetary policy into a surreptitious form of illegal fiscal transfer.

The workaround, Reuters reported on Dec. 19, could be for national central banks to pay up to cover the rest of the eurozone against any of their government’s losses. The size of the provision could potentially be based on ratings or credit default swaps. That raises the risk that governments might have to pony up cash to enable their central banks to meet a margin call from other eurozone central banks.

This wouldn’t render the whole QE exercise pointless. The ECB would still be able to increase its balance sheet, flood markets with printed funds, and weaken the currency. If it’s the only way to secure German approval, it’s better than nothing.

Yet the less the ECB mutualises QE, the less effective the overall policy will be. Governments will remain exposed to their own credit risk, so weaker sovereigns’ credit spreads will fall less than if risks were centralized, thus keeping the cost of debt there higher. Economies won’t recover as quickly.

When the ECB was surreptitiously supplying peripheral banks with emergency liquidity assistance in the 2010-2013 crisis, keeping the risks with each national state was hard-nosed but understandable. Now it has banking union, things should have moved on. Instead, Frankfurt will project the image of a central bank hampered by the distrust of its members, and a eurozone that is still careening further apart – even as the threat of deflation and poor growth spreads across the continent.

The European Central Bank is working on ways to reduce the risk of losses for the eurozone member states on sovereign bonds bought under its asset purchase facilities, according to a Reuters article published Dec. 19. Countries may have to set aside provisions to protect other states, Reuters reported.

The European Central Bank is working on ways to reduce the risk of losses for the eurozone member states on sovereign bonds bought under its asset purchase facilities, according to a Reuters article published Dec. 19. Countries may have to set aside provisions to protect other states, Reuters reported.