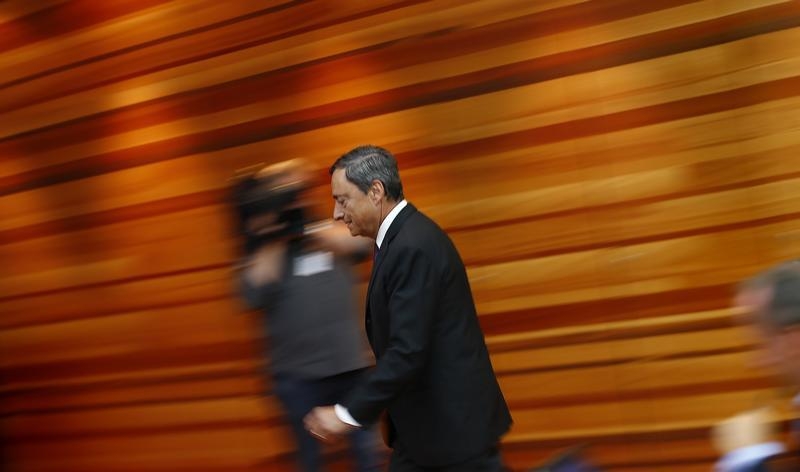 The latest parlour game in financial markets is guessing the size of the European Central Bank’s upcoming four-year targeted long-term liquidity operations (TLTROs): how many banks will tap the ECB, for how much?

Mario Draghi’s stated goal is to grow the ECB balance sheet back to its 2012 level, or about 3 trillion euros. If banks’ enthusiasm for the first facility is subdued – for example if they ask for less than 100 billion euros – markets may react by pushing up the euro – which might in turn force the ECB to embark on more ambitious sovereign bond purchases – so-called “quantitative easing.”

So far the ECB has announced an estimated 1 trillion euros through TLTROs – beginning Sept. 18 and lasting through 2016. But 350 billion euros of older, three-year loans are maturing soon. And roughly 150 billion euros of past government bond purchases will do so in coming years. That implies 500 billion euros of net lending. The ECB bill will also acquire asset-backed securities and covered bonds.

Expectations are low. Northern European banks could be reluctant to borrow: excess cash is penalised by the ECB’s negative deposit rate, and demand for credit remains low in southern Europe. Nomura expects 280 billion euros of TLTROs this year, and 550 billion in total. That would leave the heavy-lifting for the asset-backed and covered-bond programmes, which begin in October. RBS estimates the stock of those easily purchasable bonds at 244 billion euros. The ECB could fall hundreds of billions of euros short.

A good take-up this week – say 200 billion euros – would help Draghi. Yet a poor draw of half that is unlikely to spring the ECB into action. To begin with, the 3 trillion euro balance sheet target is vague: Draghi simply said the ECB would “steer towards” it. Moreover, it’s too early to write off asset purchases: volumes will depend on the price the ECB pays, regulators’ willingness to loosen rules for securitisation, and governments’ decision on subsidising them – or not. Furthermore, if governments accelerate reforms, confidence and demand for credit may grow by next year. Markets shouldn’t expect the ECB to be bounced into sovereign purchases just yet.

ECB President Mario Draghi said on Sept. 4 that the programme of TLTROs and asset-backed debt purchases would have a sizeable impact on the central bank’s balance sheet, as well as contribute to make credit more available in the euro zone.

“The second aim is to steer, significantly steer, the size of our balance sheet towards the dimensions it used to have at the beginning of 2012,” Draghi said at a press conference. That would imply a balance sheet of about 3 trillion euros, or a trillion euro increase from its current levels.