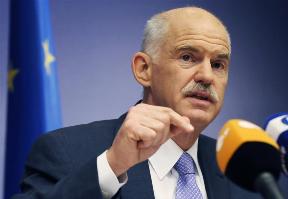 Elections are the least bad option for Greece. A collapse of George Papandreou’s government followed by early elections, as now seems possible, would be fraught with problems. But it wouldn’t be quite as suicidal for the country as the referendum that Papandreou has now called.

There are three problems with the referendum, which Papandreou has presented as a way of gaining democratic approval for the austerity measures the country has to endure. First, the vote probably wouldn’t take place until January, by which time the country’s banking system could be close to collapse. Second, the voters would probably say No, which would probably trigger Greece’s exit from the euro. Third, even if they said Yes, the Papandreou government might not be able to govern, given its tiny majority.

A general election, by contrast, could come as early as December – leaving less time for bank runs. It still might not deliver a clear conclusion. On the basis of current opinion polls, the main opposition New Democracy party would emerge as the leading force in parliament, but would still need to form a coalition to govern.

But an election could still clear the political air. New Democracy has taken a dangerous populist line in recent months – opposing the country’s austerity measures. In power, it would find it hard to be so reckless. After elections in both Ireland and Portugal this year, incoming governments had to embrace essentially the same economic programmes that they had railed against when in opposition.

In Greece, too, there is no better alternative. There might be ways of tweaking the mix of austerity – say by marrying a vigorous drive against tax evasion with lower tax rates. But Greece will have to do essentially what its European partners demand if it wants to avoid a catastrophic disorderly default.

Even members of Papandreou’s own party seem to be balking at the idea of a referendum. That raises the possibility that he will fail to secure a vote of confidence this week. Greece’s European partners should be praying, or even working, for that outcome.

Six members of Greece’s ruling Panhellenic Socialist Movement (PASOK) drafted a joint letter on Nov. 1, calling for party leader and Prime Minister George Papandreou to step down. The six rebels were reacting to their leader’s decision to hold a referendum on Greece’s new bailout package, deeming it “irresponsible”.
The news came just hours after PASOK member of parliament Milena Apostolaki resigned from the party, reducing the ruling government to a parliamentary majority of just two. Another PASOK deputy Vasso Papandreou called on Greek President Karolos Papoulias to form a fixed-term government of national unity to safeguard the 130 billion euro aid package agreed by euro zone leaders on Oct. 27.