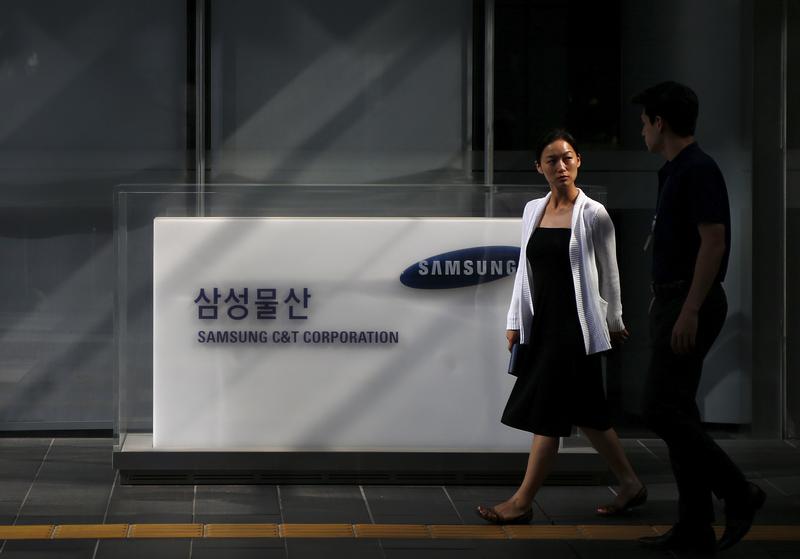 The hedge fund wants payback from South Korea for a tie-up between two Samsung units. Fighting this under free-trade rules is highly unusual. But the scandal around the deal bolsters Elliott’s case and its determination puts other targets, like Hyundai, on notice.

Employees walk past a logo of Samsung C&T Corp at the company's headquarters in Seoul, South Korea, July 16, 2015. Win or lose in its bid to derail an $8 billion Samsung Group merger on Friday, U.S. hedge fund Elliott Associates is likely to remain an irritant for the biggest of South Korea's powerful conglomerates. Even if construction firm Samsung C&T Corp secures the two-thirds of shares voted on Friday needed for a buyout offer from sister company Cheil Industries, Elliott shows no sign of going away. The fund is widely expected to continue challenging Samsung with lawsuits as a shareholder that would have more than 2 percent of the merged firm. To match SAMSUNG C&T-M&A/CHEIL INDUSTRIES REUTERS/Kim Hong-Ji - GF10000160586

An affiliate of Elliott Management, the U.S. hedge fund manager, on May 1 said it planned to seek compensation from South Korea for "damages arising from the former administration's unlawful intervention" in a 2015 merger of two Samsung affiliates.

Elliott, which failed to block an $8 billion merger between Cheil Industries and Samsung C&T in 2015, said "the actions by the former administration and the National Pension Service" had breached the U.S.-South Korea Free Trade Agreement, which promises foreign investors fair and equitable treatment.

Separately, a South Korean official said Elliott told the justice ministry in mid-April it would seek an investor-state dispute settlement (ISDS), where a company initiates arbitration directly against a country. If the two sides cannot agree, Elliott can file its case with the International Centre for Settlement of Investment Disputes.

In June, Moon Hyung-pyo, a former minister of health and welfare and chairman of the National Pension Service, was sentenced to two and a half years in jail, the Yonhap news agency reported, for his role in a corruption scandal that brought down former President Park Geun-hye.

Park was sentenced to 24 years for bribery, abuse of power, coercion and other charges in April. The NPS, a major shareholder in both C&T and Cheil, voted in favour of the merger.