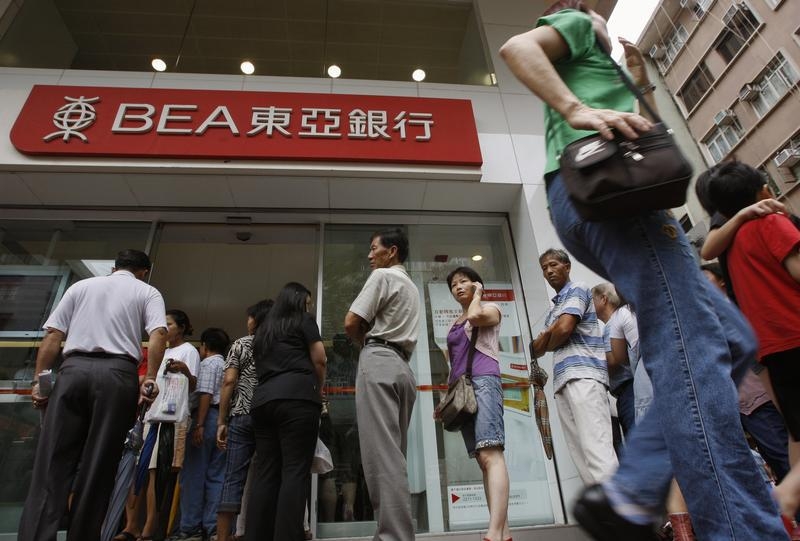 The activist fund is pushing for a sale of Bank of East Asia. Other big shareholders are unlikely to join in. It’s also a bad time to seek a buyer for a group with such a large exposure to China. Elliott’s latest salvo suggests it’s getting nervous about its $500 mln bet.

Customers line up outside a Bank of East Asia's (BEA) branch in Hong Kong September 24, 2008. Hong Kong lender BEA denied on Wednesday local rumours questioning its stability, which had drawn hundreds of people to at least one of its branches and drove its shares down more than 7 percent. REUTERS/Bobby Yip

Elliott Management on Feb. 4 publicly called on Bank of East Asia to explore options for a sale of the Hong Kong-listed bank to deliver proper value for shareholders.

The U.S. activist fund said in an open letter addressed to fellow shareholders that investors have “long suffered from BEA’s entrenched executive management, which has mismanaged the business”.

It added that “historic Hong Kong bank sales have been priced at an average of 2x book value, equating in BEA’s case to approximately HK$60 per share, or around 185% more than the current BEA share price”.

Elliott currently owns over 7 percent of BEA, up from a stake of 2.5 percent stake in February 2015.

Elliott called for shareholders, which include Spain’s Caixabank and Japan’s Sumitomo Mitsui Banking Group, to pressure the board of BEA to deliver a meaningful return through a sale.

BEA branded Elliott’s action as “very short-term focused” and said it “takes no account of the long-term, sustainable business that the bank is building”.

Shares in BEA were up 7 percent at HK$23.35 by mid-morning in Hong Kong, but are still down 19 percent since the start of the year.