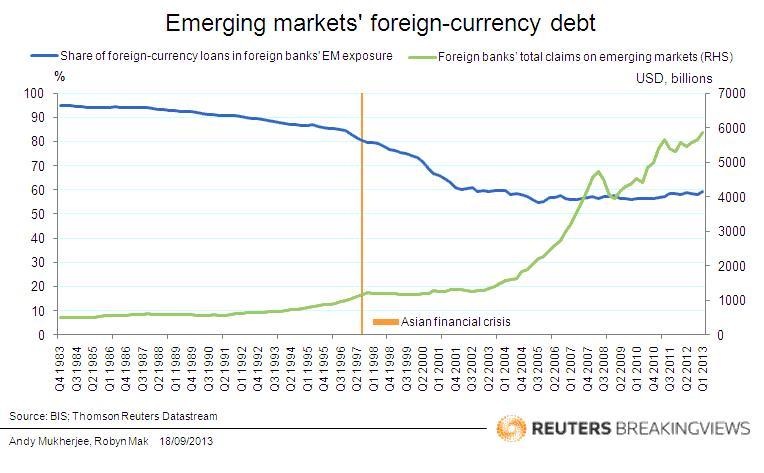 Emerging markets are sitting on a $5.8 trillion pile of debt to foreign lenders. Yet they are far less vulnerable to sudden capital flight than they were two decades ago.

At about 20 percent of these countries’ combined GDP, the debt is large. Besides, it has grown by 48 percent in just four years, according to recently released data from the Bank for International Settlements. Some investors worry about a repeat of the balance-of-payment crises of the 1990s, when foreign lenders rushed headlong into Mexico and southeast Asian countries, and then turned tail.

But this time may be different, and not just because emerging markets now own $7.5 trillion in foreign-exchange reserves. While rising U.S. interest rates are once again pressuring emerging market currencies, international banks are unlikely to exacerbate the funding stress with the same viciousness as before. That’s because 40 percent of their exposure to developing countries – equivalent to $3.45 trillion – consists of local-currency loans given out by their overseas units. Before the 1997 Asian crisis, this figure was less than 20 percent.

Even among foreign lenders, local-currency loans are more stable than debt denominated in other currencies. In the two years to June 1999, foreign-currency loans by U.S., U.K., German, French, Swiss and Japanese banks to developing Asian economies fell 24 percent. The little local-currency business these lenders did in Asia back then grew by 1.4 percent. More recently, Eastern Europe saw foreign-currency borrowings from the same club of overseas lenders drop 30 percent in the two years following the 2008 crisis. The cutback in the lenders’ domestic-currency exposure was less than half as severe.

In the bond market – the other route through which emerging markets load up on foreign-currency debt – borrowers including governments have shown a growing preference to borrow in their home currencies.

When it comes to contagion risk, the national identity of moneylenders is not as important as the colour of their money. As long as emerging markets owe debts to foreigners in currencies their central banks can freely print, they are less likely to experience a debilitating crisis.

Borrowers in developing countries owed foreign lenders $5.85 trillion at the end of the first quarter, according to the Bank for International Settlements.
But after excluding local-currency loans by the local affiliates of foreign banks, claims were $3.45 trillion.

Borrowers in developing countries owed foreign lenders $5.85 trillion at the end of the first quarter, according to the Bank for International Settlements.
But after excluding local-currency loans by the local affiliates of foreign banks, claims were $3.45 trillion.