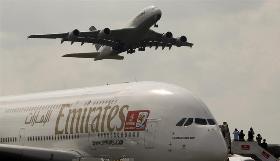 The Dubai carrier is mulling acquisitions again after a decade of organic growth. Tough competition and a unique chance to win volume from India are strong incentives for Emirates to brave the risk of buying minority stakes in regional rivals.

Dubai’s Emirates airline said on April 16 that it is studying new opportunities to buy foreign carriers if they fit the emirate’s strategy.
“Now there are studies for various opportunities to acquire international carriers… if they fit the Dubai business model,” United Arab Emirates news agency WAM cited the airline’s chairman Sheikh Ahmed bin Saeed al-Maktoum as saying.
“Anything to do with aviation and our business, if it is at the right price, we are always interested,” Sheikh Ahmed said at an aerospace conference in Abu Dhabi, the capital of the UAE.
But the Dubai government-owned carrier was not in talks with any Indian airline at the moment, he said.
India’s cabinet is expected to make a decision on whether to allow foreign airlines to buy stakes in local carriers this week.
Emirates is the world’s largest customer of the Airbus A380 superjumbo. It ordered 90 A380 aircraft in 2010, with about 70 yet to be delivered.
In an interview with Arabian Business published on April 17, Qatar Airways chief executive said he was “not interested in any small airline”.