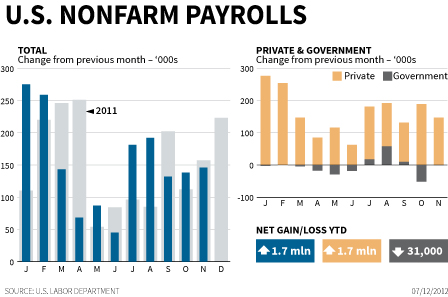 The 146,000 new positions in November were more than expected while the 7.7 pct unemployment rate is the lowest level since the end of 2008. But the labor force participation rate also sank to a 30-year low and fiscal austerity looms. That portends a workforce reversal of fortune.

U.S. nonfarm employment increased by 146,000 on a seasonally adjusted basis in November, according to a Dec. 7 report from the Bureau of Labor Statistics, while the unemployment rate fell by 0.2 percentage point to 7.7 percent, the lowest level since December 2008. September and October job creation figures were revised down by a total of 49,000, with government payrolls falling by 51,000 in October. According to the BLS, Hurricane Sandy did not substantively impact the national employment and unemployment estimates for November.
The labor force participation rate fell 0.2 percentage point to 63.6 percent, the lowest level since 1981.