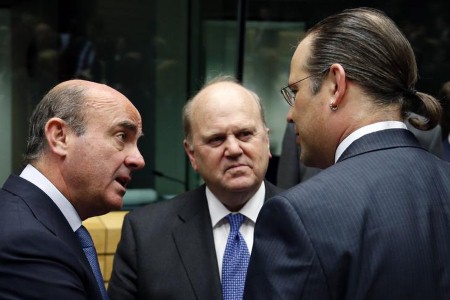 European taxpayers are gradually being insulated from the risks taken on by their banks. An agreement reached in the early hours of June 27 by European Union finance ministers means that future bailouts will be financed to a greater extent by bank shareholders and creditors, rather than via public money. That represents significant progress.

Any bank that finds itself running out of capital will have to replace it first by orchestrating a bail-in of up to 8 percent of its total liabilities. A resolution fund financed by individual member states will contribute another 5 percent of bailout costs. Taxpayers will only be on the hook after that, either via 60 billion euros of pooled money provided by the European Stability Mechanism, the euro zone’s bailout fund, or via national governments for non-euro members.

This should prevent some of the more obvious howlers from the last financial crisis. Rather than providing potentially ruinous guarantees on bank liabilities – as Ireland did in 2008 – creditors will have to be prepared to be hit, which will force them to price their bonds appropriately. And a clear hierarchy of who will be bailed in will avoid the type of cack-handed assaults on insured depositors witnessed in the first version of the Cypriot bailout. Deposits below 100,000 euros remain protected and, beyond that, small businesses and retail depositors will rank senior to large corporate depositors and senior bondholders.

However, the taxpayer airbag is not failsafe. Giving governments flexibility over areas like exactly what liabilities will be hit could allow them to favour some creditors over others – as the Dutch did when bailing out SNS earlier this year. More importantly, even a 13 percent bail-in/resolution fund buffer might not be sufficient for epic failures on the scale of Cyprus.

There is also a transition issue. The bail-in protocol is not currently due to be activated until 2018, and member states are given ten years to fill their resolution fund. It’s unclear what will happen if a bank goes bust in the interim.

Yet, in general, European politicians have succeeded in devising a scheme that is reassuringly inflexible on its most important points. The key challenges now are to hold firm against a substantial watering down by the European Parliament, and to set up a powerful pan-European resolution authority to decide when to trigger a bank bail-in. But for now, the agreement is a decent start.

European bank investors will be first in the queue to take losses if their institutions need more capital in the future, according to a draft directive agreed by the European Council on June 27.
From 2018 bank shareholders and creditors will have to bear losses of up to 8 percent of the bank’s total liabilities, or 20 percent of risk-weighted assets under special circumstances. The contribution of a resolution fund to be set up by each member state and financed by national banks would be capped at 5 percent. The resolution funds would have to represent 0.8 percent of their banking sector’s covered deposits within ten years.
Certain liabilities, such as covered bonds, deposits up to 100,000 euros and pensions are excluded from bail-ins. Deposits from citizens and small businesses will have preference over the claims of ordinary unsecured, non-preferred creditors and depositors from large corporations.
National resolution authorities have the power to exclude liabilities on a discretionary basis if they cannot be bailed in within a reasonable time, to avoid contagion, to ensure continuity of critical functions, and to avoid value destruction that would raise losses borne by other creditors.