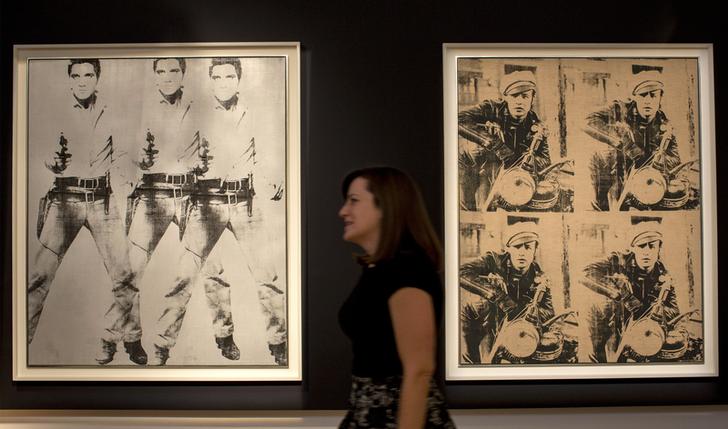 Sotheby’s traded a less spectacular but still hefty $344 million of art a day earlier. London, though, is far behind in the sizzling sector. European red tape is partly to blame.

Sales in the UK of works by living artists fell nearly a quarter between 2009 and 2013, whereas they grew by 70 percent in America, according to Arts Economics. The UK’s cut of the contemporary segment has dropped from 35 percent to 15 percent in just five years. At Sotheby’s last month, the London sale of contemporary art raised just 28 million pounds, barely more than a tenth of this week’s U.S. sale total.

That’s despite the British accents of auctioneers Oliver Barker at Sotheby’s and Jussi Pylkkanen at Christie’s. In other categories like Old Masters and Impressionists the UK holds its own. But with contemporary art breaking all records, that’s relatively cold comfort – just as it is for Sotheby’s, which has come under fire from activist investor Dan Loeb partly because it is lagging badly behind arch-rival Christie’s in the contemporary arena.

One problem is Brussels. In 2006 the EU introduced a levy on sales of works by artists while they are alive and up to 70 years after their death. While New York might be the natural place to sell a Warhol or a Koons, London could fit the bill for Lucian Freud or Gerhard Richter were it not for the tax.

There are other factors, of course. The United States is in better economic shape than Europe and plays host to a cluster of the biggest active collectors. And China replaced the UK as the world’s second-largest art market in 2010. Still, a regulation meant to soothe French and German anti-competition grumbles has instead helped New York beat London in the hottest art market.

A woman walks between "Triple Elvis" and "Four Marlons" by Andy Warhol during a media preview at Christie's auction house in New York, October 31, 2014.

Christie’s achieved a new art auction record on Nov. 12, selling $853 million worth of contemporary and post-war art in New York.

Sotheby’s sold $344 million worth of art at its New York contemporary sale a day earlier, and the separate Nov. 10 sale of works from the estate of philanthropist Bunny Mellon, mostly in the contemporary category, raised $159 million.

Arts Economics research shows that over the period 2010 to 2013, art sales in the U.S. grew over 16 percent, while the UK saw a 4 percent decline.

The British art market fell 3 percent in 2013 from a year earlier to 8 billion pounds, while global art sales grew by 10 percent.

Britain is the third largest art market in the world, accounting for 20 percent of sales by value.