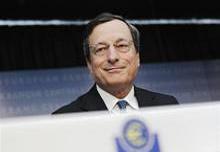 Mario Draghi must know by now that his fight against “convertibility risk” is an uphill struggle. The president of the European Central Bank last month justified his intention to turn to aggressive bond-buying by the need to quash once and for all speculation that the euro might implode. It looks like the member states’ politicians haven’t really been listening. They should learn to keep silent if the ECB’s programme is to ever work.

It would be wrong to read too much into the most recent statements. Austria’s foreign minister has called for a mechanism to oust undisciplined members from the euro. His counterpart in Finland also said the country has been preparing for the scenario of a breakup. But neither country says that should happen. And such statements are usually geared towards a domestic audience. Finland and Austria’s opinions matter, but the fate of the zone will hinge on Germany, and its tolerance for bailouts and central bank bond-buying. Markets are paying more attention to comments from Angela Merkel last night, which seemed supportive of Mario Draghi’s policy.

Still, the prattle is likely to get louder in the coming months. Greece may need more money, could ask for an extension to its programme and a second debt restructuring, which will be a tough pill for creditor nations to swallow. And they will have to keep writing more cheques for other countries. A bailout of Spain and possibly Italy will leave over 30 percent of the euro zone by gross domestic product in receipt of some form of financial aid. The next flashpoint could be Dutch elections in September, where even the leading party advocates a referendum on closer euro zone fiscal integration.

The ECB’s upcoming bond-buying programme will be a confidence game. The idea is to drive down sovereign yields, and thus buy time for countries to reform and the zone to integrate financial and fiscal policies. Investors need to be convinced to start buying bonds again, allowing banks across the zone to resume lending to each other. But if anti-euro sentiment grows, markets will remain fragmented, and relief will be short-lived.

Countries that fail to keep their financial promises should be thrown out of the euro zone, Austria’s foreign minister said, adding that he had talked with European colleagues on the subject and countries including Germany would support the idea.
“We need to have the possibility of throwing somebody out of the currency union…countries that do not stick to their commitments,” Michael Spindelegger said in an interview with Austria’s Kurier newspaper published on Aug. 17.