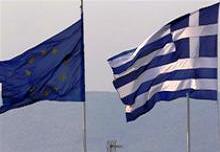 Growing risk of a Greek euro exit has sent Spanish yields soaring and investors rushing for German Bunds. But French debt is far less stressed than during last autumn’s panic. Though investors may be counting on policymakers to contain the fallout, there is room for shocks.

A Greek (R) and an EU flag fly over the Greece's Finance Ministry in Athens November 3, 2011. REUTERS/Yannis Behrakis

Greek politicians were still locked in stalemate on May 14, a week after national elections failed to produce a government able to push through the country’s austerity programme. Recent polls suggest that left-wing party SYRIZA, which opposes the bailout, would come first if new elections were held.
Euro zone officials toughened their rhetoric; making it clear Greece cannot renege on its bailout package and stay in the euro zone.
“We wish Greece will remain in the euro and we hope Greece will remain in the euro … but it must respect its commitments,” European Commission spokeswoman Pia Ahrenkilde Hansen told journalists at a news briefing on May 14. “Greece has its future in its own hands and it is really up to Greece to see what the response should be.”
Patrick Honohan, Ireland’s central bank governor, said that a Greek euro exit would not be fatal to the zone. “Technically, it can be managed,” Honohan told reporters at a conference in Estonia on May 12. “It would be a knock to the confidence for the euro area as a whole…It is not necessarily fatal, but it is not attractive.”
Luc Coene, governor of the National Bank of Belgium has also said that a Greek exit would be possible, according to a Financial Times article published on May 13.
“I guess an amicable divorce - if that was ever needed - would be possible, but I would still regret it,” Coene said.