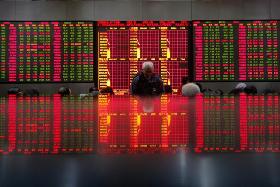 Blue chip European stocks and well-rated bonds have started the new year in pretty fine fettle. And they’ve not turned turtle despite gloomy news from S&P, and the Greek debt restructuring drama.

The European Central Bank’s Dec. 8 decision to open new credit lines for hard-pressed banks has fuelled optimism. The move also eases banks’ balance sheet strains and helps build loops of positive market feedback. Though other factors are undoubtedly at play, yields on many sovereign bonds – and not just the safest ones – are ticking down. With a second round of the ECB’s Long Term Refinancing Operation (LTRO) in the offing, euro sovereigns are likely to derive continued support.

The ECB liquidity may be helping to sustain share prices too. Meanwhile, the fall in the value of the euro may be prompting equity investors to be more positive. Until the crisis of 2008, the euro and euro equities usually moved in opposite directions. Since 2008, euro shares and the euro currency have usually moved up and down together. Since Dec. 8, the Stoxx 600 index of euro equities has climbed about 7 percent while the euro has dropped against the dollar by a similar amount.

But although customers of euro zone exporters will find goods and services cheaper, it is easy to exaggerate the impact of such currency moves. Only about 16 percent of euro zone GDP is exported outside the area. Besides, the economic proof that devaluation encourages export trade is far from conclusive. And on a trade-weighted basis the euro is only back at its lifetime average. The volume of cash in the second tranche of LTRO, meanwhile, could disappoint if it falls way short of the near-500 billion euros of the first one. If the numbers are a lot smaller, sentiment could switch back.

Pan-market optimism may be merited, especially with regard to equities which in Europe trade on a forward p/e multiple of 10, compared to a 20-year average of 15. But if European economies stagnate or are hit by recession, the optimism could rebound on investors. Gold, that traditional harbinger of doom, fell quite heavily before Christmas. But it has chased upwards again since New Year. That is hardly a good sign.

Since the start of December, just before the European Central Bank lowered interest rates and initiated its three year Long Term Refinancing Operation, the euro has fallen from 1.3463 against the dollar. On Jan. 16 the exchange rate was 1.2661.
The Stoxx 600 index of European shares has risen from 237 on Dec. 8 to 253 on Jan. 18. The yield on 10-year UK government bonds has fallen below 2 percent. Yields on German and U.S. 10-year sovereign debt have also fallen.