You can’t beat the ECB 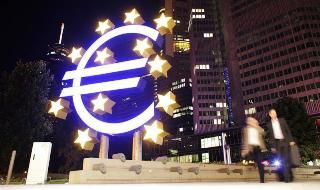 A solution to the euro zone debt crisis needs to address three key points; Italy, Greece, and bank funding. All three can be tackled without the European Central Bank, but an ECB-free solution may not be enough and would send a signal of disunity that might spook markets.

Start with bank funding. Euro zone banks have struggled to regain access to long-term funding markets since the sovereign crisis spread to Italy in July. The ECB has been propping them up with short-term facilities, but so far has resisted long-term lending. Governments could instead use the European Financial Stability Facility to guarantee bank debt, but that would require approval by national parliaments. A compromise would be for the ECB to provide a one-year facility, as it did in 2009, and re-open its covered bond buying programme, which was deactivated last year. Banks might still be under pressure to deleverage – but it would be better than nothing.

Then there’s Greece. A larger Greek restructuring may be needed to avoid a disorderly default, but the ECB formally opposes default. It has already threatened not to accept defaulted collateral from Greek banks in that event, arguing that it would breach its eligibility criteria. One possible compromise would be to allow Greek banks to move all borrowings to the Bank of Greece’s emergency liquidity assistance facilities (ELA), instead of the main ECB open market operations. The credit risk would be borne by the Greek central bank, not the Eurosystem. But the ELA piles further contingent liabilities on Greece’s sovereign balance sheet.

Lastly, there’s the EFSF. The euro zone is under pressure to leverage up the EFSF’s 440 billion euros of guarantees so that it is large enough to support Italy and replace the ECB, a reluctant buyer of Italian debt. The EFSF’s firepower could provide first-loss guarantees, or, more implausibly, the bailout fund could be turned into a bank. But both plans would be weakened if the ECB was perceived to be walking away. A proposal to allow the new EFSF bank to borrow directly from the ECB has already been rejected by Bundesbank head Jens Weidmannn and ECB board member Lorenzo Bini Smaghi.

The ECB’s stance might change once Mario Draghi takes over as ECB president in November, and new members join the board. But considering that Bank is a collective body, a dramatic U-turn is unlikely.