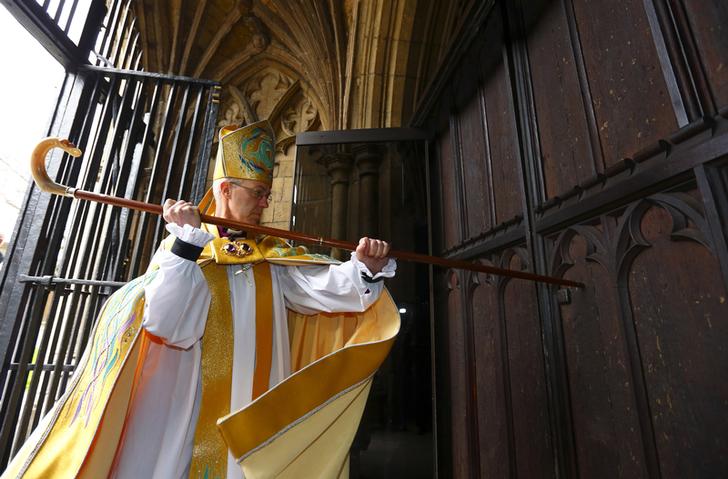 British “payday lenders” gouge feckless borrowers with four-digit interest rates. The new head of the Church of the England wants to take them on with compassionate community banks. Those institutions can do good, but not by being just slightly less rapacious than rivals.

The new Archbishop of Canterbury Justin Welby knocks on the door of Canterbury Cathedral as he arrives for his enthronement ceremony, in Canterbury, southern England March 21, 2013.

Justin Welby, the Church of England’s Archbishop of Canterbury, said in an interview with Total Politics magazine, published on July 25, that the church would create “credit unions that are both engaged in their communities and are much more professional”. He said that one target of this “decade-long process” was so-called payday lenders, including Wonga. Welby told the magazine, “I’ve met the head of Wonga and I’ve had a very good conversation and I said to him quite bluntly we’re not in the business of trying to legislate you out of existence, we’re trying to compete you out of existence”.
The Financial Times reported later on July 25 that the Church commissioners, which manage the Church of England’s endowment, had invested 75,000 pounds in Accel Partners, an American venture capital firm which led the fundraising for Wonga in 2009. On July 26, Welby told a BBC radio programme that he was “embarrassed” and “irritated” by the investment.
The homepage of the Wonga website includes information on a sample loan: “Amount of credit: 150 pounds for 18 days. Interest: 27.99 pounds. Interest rate: 365 percent per annum (fixed). Transmission fee: 5.50 pounds. One total repayment of 183.49 pounds. Representative 5853 percent APR”.