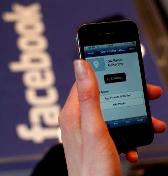 What’s the biggest risk facing Facebook? Hint: it may be in the palm of your hand. Half of the social network’s 845 million users now access the site through their cellphones, and that number is surging. Problem is Facebook currently receives virtually no display advertising revenue from small screens. The rapid shift to mobile Internet usage could be Mark Zuckerberg’s biggest threat – and he knows it.

In the United States, where Facebook made 56 percent of its $3.7 billion of revenue last year, sales of mobile devices outstripped those of PCs. While one of the first applications downloaded may be Facebook, the 90 million Americans who own smart phones are increasingly supplanting time spent on their computers with time on their mobiles.

That’s a problem for Facebook. Americans now spend about a quarter of their screen time in front of a computer, even though advertising dollars don’t yet reflect this shift away from television and other media. But ad sales are even further behind in the mobile environment, which is one reason Facebook reports negligible mobile ad revenue.

So far, this hasn’t retarded Facebook’s growth. It served up 42 percent more ads in 2011 at prices 18 percent higher than the year before. But Facebook’s growth has been decelerating as mobile internet usage has surged.

Advertisers will eventually become more comfortable with the mobile medium. Cellphone ads could even command a premium some day. The ability to pinpoint a customer’s location and target offers geographically should make everything from real estate to restaurant pitches more effective. But this could take a few years, leaving PC advertising-reliant Facebook in the lurch.

The bigger risk – which Facebook acknowledges in its prospectus – stems from the fact that rivals Apple and Google control the mobile operating systems powering 90 percent of smartphones sold in the United States. They’d be daft to restrict access to Facebook, given its popularity with consumers. And any hint of unfairly squelching Facebook would have antitrust regulators dusting off their Microsoft/Netscape playbooks.

But Facebook notes that mobile ad sales are projected to grow from $1.5 billion in 2010 to $17.6 billion in 2015. With numbers like that to shoot for, there’s plenty of incentive for rivals to use their operating systems as a chokepoint to throttle Facebook’s growth.