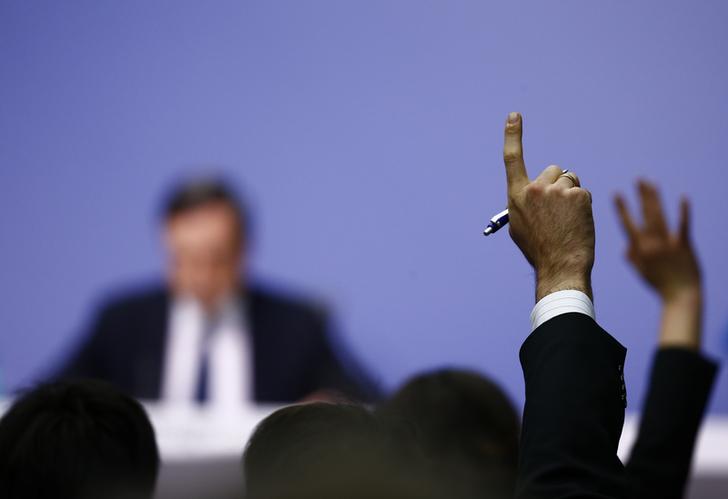 Euro zone prices are falling annually, for the first time since 2009. Investors’ faith in the European Central Bank’s ability to deliver on its “price stability” mandate is falling even faster – and rightly so.

Cheaper oil was largely responsible for the 0.2 percent annual decline in consumer prices reported for December by the European Union statistics office. Even so, the ECB can hardly be absolved from responsibility for missing by such a huge margin its self-imposed target of keeping inflation “below but close” to 2 percent.

The central bank has seen inflation in the monetary union fall further and further below the target since 2013. A number of euro zone members have been reporting sub-zero rates for some time. In 2009, by contrast, the inflation rate dropped suddenly and sharply.

Investors’ dwindling confidence in the ECB’s ability to fulfil its mission is another danger signal which has been flashing for some time. The central bank may well focus on the medium term, rather than being swayed by monthly figures. But its own preferred “five-year/five-year forward” gauge, which tracks how investors expect prices to behave over a five-year period starting five years from now, has been on a downward trajectory for five months. It hit a record low of 1.58 percent on Jan. 6. Inflation expectations never fell to such lows even at the height of the financial crisis, the last time consumer prices were falling annually.

The central bank can’t be accused of inaction. It has lowered its key policy interest rate to near-zero, and taken measures to improve the flow of credit. But the eagerness of President Mario Draghi to build a consensus for action has prevented him from acting in time to counter the deflation threat. And he has mostly cobbled together compromise measures, rather than launching the all-out quantitative easing which is now a step closer.

Draghi said in a New Year newspaper interview that the risk of the ECB failing to fulfil its price stability mandate was higher now than half a year ago. The reality is that the ECB has already failed, and needs to take strong action, without delay.

Euro zone consumer prices fell by 0.2 percent in December compared with a year earlier, a first estimate by the European Union statistics office showed on Jan. 7. The last time inflation was negative was in 2009. Economists polled by Reuters had on average expected prices to fall by 0.1 percent year-on-year.

Euro zone consumer prices fell by 0.2 percent in December compared with a year earlier, a first estimate by the European Union statistics office showed on Jan. 7. The last time inflation was negative was in 2009. Economists polled by Reuters had on average expected prices to fall by 0.1 percent year-on-year.