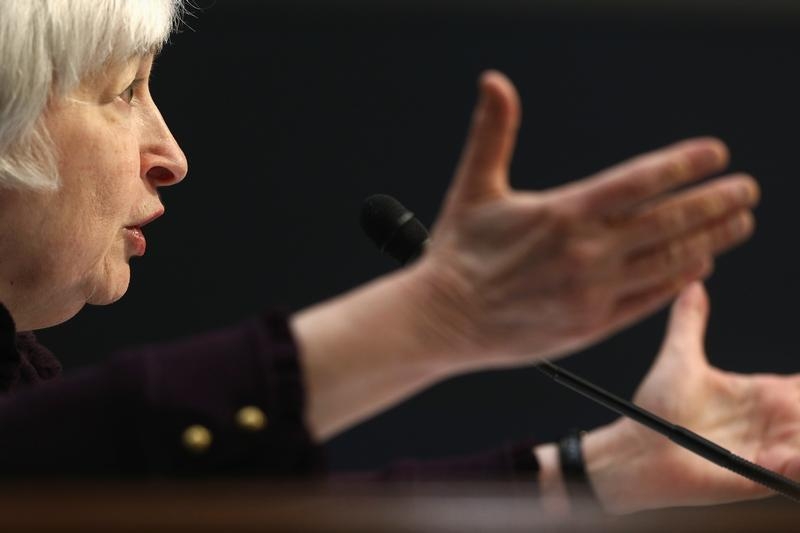 The progressive Fed Up group says the U.S. central bank is beholden to Wall Street. It wants more transparency and an end to dividends for banks. The Fed is already under pressure from conservatives. Now Democrats, too, may turn against Chair Janet Yellen and her colleagues.

U.S. Federal Reserve Chair Janet Yellen testifies on the economy before the Joint Economic Committee on Capitol Hill in Washington May 7, 2014.

The Fed Up coalition on Aug. 22 released a report calling on the U.S. Federal Reserve and its 12 regional banks to become a fully public institution, partly by ending the dividend payments the Fed currently sends to private banks. Fed Up comprises 25 organizations, including the Economic Policy Institute and the AFL-CIO union.

Member banks of the Federal Reserve system receive dividends in exchange for the paid-in capital that they keep at regional Fed banks. The Fed Up group said the payments show that the Fed is owned by those banks.

The group's report also said two-thirds of the directors on the boards of regional Fed banks are chosen by commercial banks, while one-third of the board seats are reserved for representatives of the banks themselves. "Instead of being public institutions accountable to the American people, the Federal Reserve banks are owned by and accountable to the very same commercial and Wall Street banks that they are supposed to regulate," Fed Up said.

The report argues Wall Street employees should be barred from serving as directors at Fed banks. The group also said the regional Fed banks should be subject to public scrutiny, including reviews by the Government Accountability Office.

The report comes ahead of a protest the group has planned on Aug. 25 in Jackson Hole, Wyoming, where an annual economic symposium hosted by the Federal Reserve Bank of Kansas City takes place.