Finally, not so jobless? 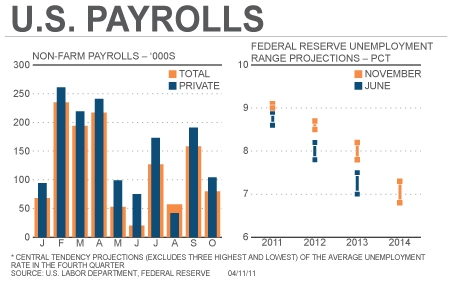 The U.S. economy added only 80,000 jobs last month. But the private sector did better, and earlier readings were revised up. With labor costs still lower than in 2008, unemployment could decline faster than the central bank thinks. That’s good for the unemployed – and for Obama.

U.S. nonfarm employment increased by 80,000 on a seasonally adjusted basis in October, according to a Nov. 4 release from the Bureau of Labor Statistics. The unemployment rate declined a tick to 9 percent. The past two months’ readings were revised higher: jobs added in August, originally reported as zero, were further revised to 105,000 from last month’s revised total of 57,000; and September’s figure for new jobs was revised to 158,000 from 103,000.

Nonfarm business productivity rose at a 3.1 percent annual rate in the third quarter. Unit labor costs have declined 2.6 percent from their peak in the fourth quarter of 2008.