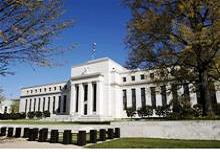 The U.S. central bank is running out of taboos to break. This week, Boston Federal Reserve President Eric Rosengren admitted that the latest quantitative easing broadside would debase the dollar. His counterpart in Minneapolis, Narayana Kocherlakota, traditionally on the hawkish side, said that an above-target inflation rate of 2.25 percent would be tolerable.

Regional Fed bosses have more leeway to speak their mind than, say, Fed Chairman Ben Bernanke – especially when, like Rosengren and Kocherlakota, they’re not currently voting members of the policy-setting Federal Open Market Committee. Their pronouncements still carry weight. Rosengren has a reputation for choosing his words wisely, while the Minneapolis Fed boss is known for vigilance on inflationary threats.

Rosengren’s admission that Fed policy may weaken the dollar provides ammunition to the likes of Guido Mantega, Brazil’s finance minister. He thinks policies like the Fed’s bond-buying devalue the currencies of the countries undertaking them, hurting the competitiveness of economies like Brazil’s – though the dollar isn’t currently trading too far from where it was two years ago on a trade-weighted basis.

Meanwhile, Kocherlakota’s remarks could alarm those who see running the dollar printing presses as feeding inflation. U.S. consumer prices rose a mild 1.7 percent in the year to August. But the Fed’s recent pledge to buy mortgage-backed securities on an open-ended basis has fueled suspicions that Bernanke and his colleagues are willing to see prices rise faster than the semi-official target of 2 percent a year.

Those are the most recent sacred cows to be slaughtered. But Bernanke has dispatched several since the start of the financial crisis, from the Fed’s participation in the bailout of Bear Stearns to its expansion of emergency lending to banks and the launch back in 2010 of a plan to buy $600 billion of U.S. Treasuries – the first round of quantitative easing. The Fed boss’s efforts to head off any repeat of the Great Depression have angered many conservatives, in particular the Tea Party faction, something that could yet bring political efforts to curb the Fed’s power.

A weaker currency and an increased risk of inflation follow directly from the Fed’s war on stagnation. But actually saying so could bring more domestic and foreign brickbats.

Boston Federal Reserve President Eric Rosengren on Sept. 20 said current policy aimed at lowering long-term rates will “affect demand for U.S. assets, resulting in a modest change in the exchange rate - and this is likely to provide some support for export-oriented industries.”

The same day, Minneapolis Fed President Narayana Kocherlakota said “allowing the medium-term outlook for inflation to deviate from 2 percent by a quarter of a percentage point in either direction” would give the Fed needed flexibility while “posing no threat to the credibility of the long-run target.”