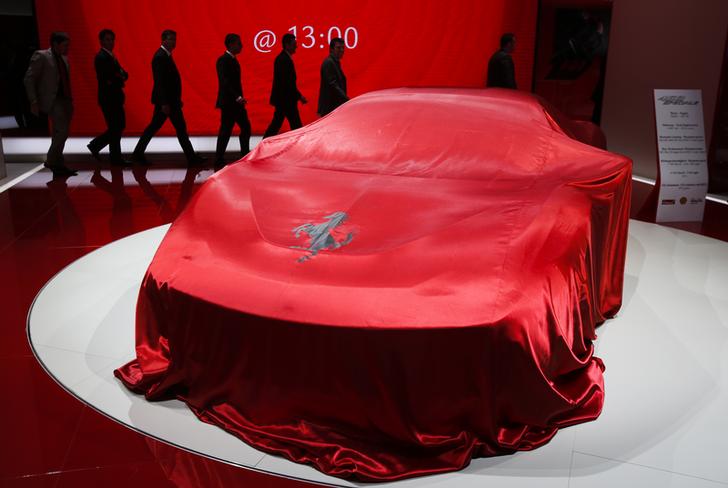 The hottest name in sports cars is joining the spinoff bandwagon. Fiat Chrysler will sell 10 pct of Ferrari and hand the rest to investors. Fiat shares zoomed up. Yet the split is largely symbolic. Ferrari needs to stay linked to Fiat, and the cash proceeds will be limited.

A Ferrari 458 Speciale car is covered before its presentation during a media preview day at the Frankfurt Motor Show (IAA) September 10, 2013.

FCA will list the stake in the United States and possibly on a European exchange. Its remaining 80 percent stake in Ferrari would be distributed among FCA shareholders, who include Fiat’s founding Agnelli family. The final 10 percent of Ferrari is held by Piero Ferrari, the group’s vice-chairman and son of the carmaker’s founder Enzo Ferrari.

FCA listed shares in New York this month. It plans to invest 48 billion euros ($61 billion) over the next five years.

In September Luca Cordero di Montezemolo quit as Ferrari chairman. His relationship with Fiat Chief Executive Sergio Marchionne had soured in recent years, Reuters reported. Montezemolo had wanted to keep Ferrari autonomous while Marchionne had pushed to better integrate the business within Fiat, Reuters said, citing people with knowledge of the situation.

Ferrari had net revenue of 2.34 billion euros in 2013, with earnings before interest and tax of 364 million euros. The company, which deliberately limits the number of vehicles produced, sold about 7,100 cars that year. Models include the 238,000 euro, 605-horsepower 458 Speciale.