No concession, in advance 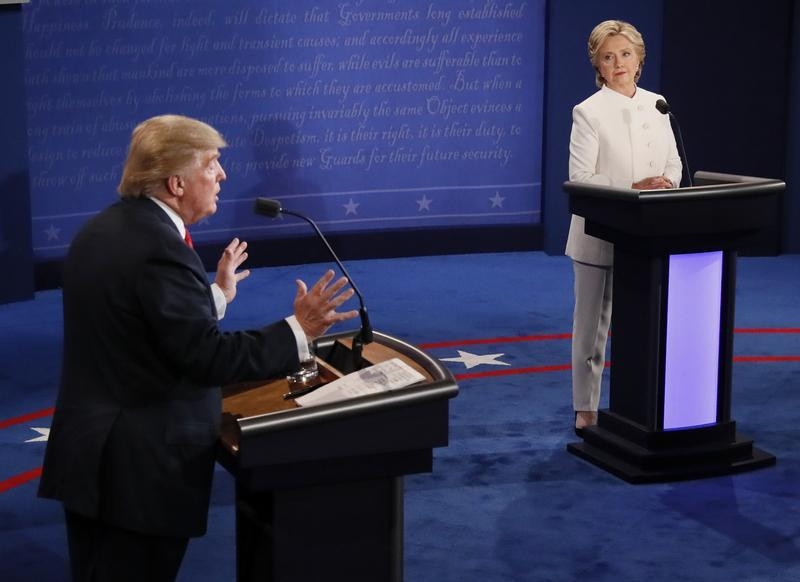 The final presidential debate made American financial assets a bit riskier. Republican nominee Donald Trump and Democratic rival Hillary Clinton faced off for the last time before the Nov. 8 election. The event was supposed to focus on thorny issues of interest to global investors like entitlements and the economy. Instead, voters were treated to little substance on those matters, lots more rancor and, disturbingly, a failure by one candidate to commit to accepting the will of the people.

The White House hopefuls fell into their old campaign strategies for much of Wednesday’s hour and a half match-up. Clinton accused Trump of lacking presidential temperament and Trump questioned why she wasn’t more effective in changing the political system during her “30 years” in office. He brought up her private email server scandal. She referenced his sexual harassment of women.

The last chance for voters to see the presidential hopefuls together only superficially touched on substantive economic issues. Moderator Chris Wallace did not receive any good defense from either candidate on the wisdom of their fiscal plans, which would both raise the national debt as a percentage of GDP, though Trump’s broad-based tax cuts would leave the country far more indebted.

They were also asked about their views on government entitlements like Medicare and Social Security. Clinton said she wanted to ensure these benefits would be secure by boosting contributions from the wealthy. Trump responded by calling her “such a nasty woman.”

But the most surprising comment of the evening came from Trump, who said he hadn’t yet decided whether he would accept the election results. He said “I will keep you in suspense,” the apotheosis of recent charges on the campaign trail that the ballot would be “rigged.” He has also been exhorting supporters to monitor polling centers.

The prospect of a major party candidate failing to respect the results of a democratic vote makes the world’s richest economy less secure. The peaceful transition of power has been a hallmark of U.S. democracy since the founding of the country 240 years ago. Trump’s break with history injects an unprecedented level of uncertainty into global markets.

True, the former Apprentice star’s rhetoric is often difficult to square with reality. But his divisive White House run has already made markets nervous. His preemptive rejection of the voters’ will puts investors in uncharted territory.

Democratic presidential nominee Hillary Clinton and her Republican rival, Donald Trump, squared off in their third and final debate before the Nov. 8 election. The event was held at the University of Nevada in Las Vegas.

Democratic presidential nominee Hillary Clinton and her Republican rival, Donald Trump, squared off in their third and final debate before the Nov. 8 election. The event was held at the University of Nevada in Las Vegas.