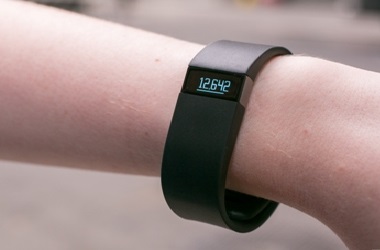 Leave it to a maker of fitness trackers to showcase some rare and refreshing financial health out of Silicon Valley. Fitbit, whose wristbands measure physical activity, filed to go public on Thursday with strong profit to accompany fast sales growth. Though its cumbersome dual-class share structure may not slow it down, a sprinting Apple might.

Fund managers have become accustomed to being sold unprofitable technology companies aiming to change the world and using tortured measures of earnings. Fitbit leaps ahead of that rabble. In its initial public offering documents, the company revealed that its revenue grew ten-fold in the last two years, to almost $750 million in 2014, generating operating profit of $158 million for a respectable margin of 21 percent.

Fitbit has lofty goals “to empower and inspire you to live a healthier, more active life,” but they at least seem apropos of its products. The letter in the prospectus from founders James Park and Eric Friedman is also a simple, two-paragraph note of gratitude instead of the usual pablum, such as Etsy’s recent “letter from Chad” – no surname – espousing a “more joyful” economy.

In the end, however, it’s hard to be completely swayed by Fitbit’s virtues. The company touts sales of nearly 21 million devices since inception in 2007. In two months, Apple clocked in 2.3 million orders – or more than 10 percent of Fitbit’s eight-year sum – of its new watch before it was even on the market, reckons a KGI Securities analyst.

A rough-and-ready valuation of Fitbit can be done using GoPro, the wearable high-definition camera maker that went public last year, also with profit to show for its fast-growing sales. It’s hard to assume another year of 175 percent top-line growth for Fitbit, but if it were to double, at the same net profit margin it would produce a bottom line of $264 million. On GoPro’s price-to-earnings multiple of 27 times, Fitbit would be worth $7.1 billion. That would be one healthy result.

Fitbit on May 7 filed documents with regulators to go public, disclosing that it generated about $132 million of net income last year on $745 million of revenue. The company said it had sold nearly 21 million of its wearable devices since inception in 2007.

The initial public offering is being led by Morgan Stanley, Deutsche Bank and BofA Merrill Lynch.

Fitbit has two classes of stock. Its Class A shares, which come with one vote apiece, are the ones to be listed, and the Class B shares have 10 votes each.