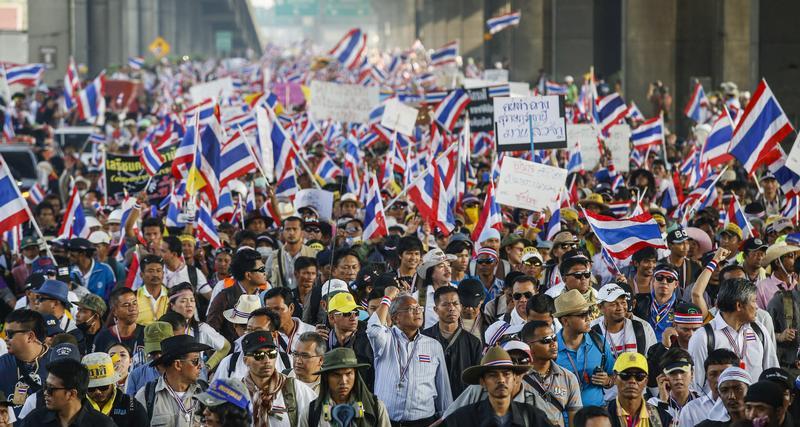 The country’s anti-graft agency is examining losses caused by buying rice from farmers at inflated prices. If charges are brought against Yingluck Shinawatra, the embattled leader’s tenuous hold on power will weaken further. But scrapping the handout will erode her support base.

Anti-government protesters hold Thai national flags during a rally on a main road leading towards the Government House in Bangkok December 9, 2013.

Thailand’s anti-corruption agency said on Jan. 16 that it would investigate the country’s rice subsidy programme. “Those who oversaw the scheme knew there were losses but did not put a stop to it,” Vicha Mahakhun, of the National Anti-Corruption Commission (NACC), told a news conference.

Caretaker Prime Minister Yingluck Shinawatra, who has called for fresh elections to diffuse opposition to her rule, is the nominal head of the National Rice Committee and could therefore eventually face charges, Reuters reported.

The present Thai government is estimated to have stockpiled between 15 and 17 million tons of rice after buying the grain from farmers at above-market prices since coming to power in 2011.

According to Reuters, Bangkok quoted $475 a tonne in a government-to-government deal with Manila last month, a third below the estimated cost of 22,000 baht ($669) per tonne the government incurred, including milling and storage.