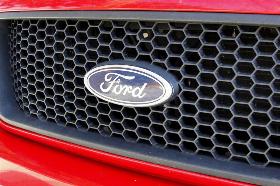 Falling a fifth short of Wall Street’s Q4 estimates dinged the automaker’s shares. But Ford’s balance sheet and product line-up are strong. And there are more cost cuts coming. Even allowing for the challenges its overseas operations face, Ford’s stock should be shiny again soon.

The Ford logo is seen on a Ford F-150 truck parked in Burbank, California April 14, 2011. For the first time in almost six years, Ford Motor Credit, the financial services arm of Ford Motor, sold an entire bond issue to investment-grade investors. The US$1.5bn offering of Ford Upgrade Exchange Linked (FUEL) notes signals a new chapter in the issuer’s funding strategy as it charts its return to investment-grade territory.

Ford Motor on Jan. 27 reported pre-tax operating profit of $1.1 billion for the fourth quarter. After tax, net income was 20 cents a share, missing the sell-side consensus estimate of 25 cents a share, according to Thomson Reuters. Higher expenses, especially for commodities costs, accounted for the miss.

Ford said it expects overall automotive pre-tax margin in 2012 to be higher than last year’s 5.4 percent. The North American autos division posted a pre-tax margin of 8.3 percent for 2011.

The automaker also booked a one-time, non-cash gain of $12.4 billion after releasing almost all its valuation allowance against net deferred tax assets. That means the company will now have an official tax rate of around 30 percent, though actual taxes paid will remain lower until the company earns enough to offset the allowance.

Ford also took a $401 million gain in the quarter from selling its Russia operations to the newly created FordSollers joint venture.