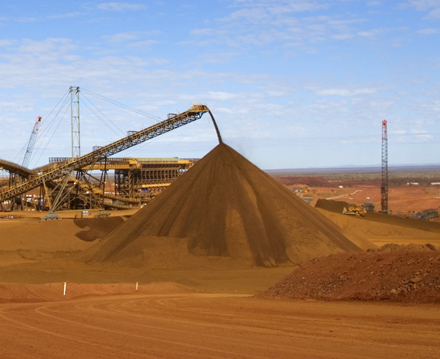 The Australian miner has refinanced $4.5 bln of debt with a five-year secured loan. That avoids breached covenants or a dilutive share issue, allowing it to benefit from past spending. Other creditors won’t like being pushed down the pecking order, but the alternative was worse.

Ore is poured onto a stockpile at a processing facility at Fortescue's Cloudbreak mine, Western Australia.

Fortescue Metals Group on Sept. 18 said it had lined up $4.5 billion in debt and was in talks to sell some of its assets.
The debt facility, underwritten by Credit Suisse and JPMorgan, will be used to pay off existing bank loans. Fortescue said the five-year facility removed all bank covenants that the company previously faced, and extended the earliest repayment date for its debt to November, 2015. The facility is secured on the assets of Fortescue and its main subsidiaries.
Separately, Fortescue said it had received “strong interest” in partnering with the company on some of its assets, and was considering these approaches. However, it added that transactions would only be pursued if they clearly add to shareholder value.
Fortescue shares closed at A$3.5, up 17 percent.