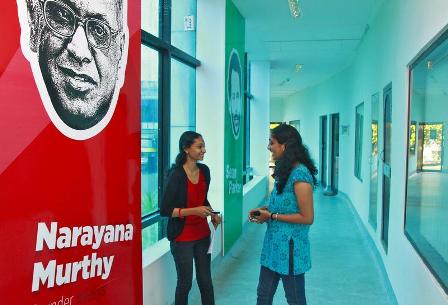 Infosys is going back to the future. Co-founder N.R. Narayana Murthy is coming out of retirement to take the helm of the Indian software outsourcing company. His return is a sign of the depth of the malaise at the former poster child of the industry.

The 66-year-old entrepreneur, who was Infosys chief executive for 19 years, is returning as executive chairman for five years. In what could be a signal of future leadership transition, Murthy’s computer scientist son is coming on board as executive assistant.

Infosys has lost its halo in the two years that Murthy has been away. Its shares fell 22 percent on April 12, when Infosys warned that revenue growth will be just 6 to 10 percent in the financial year that began on April 1. That makes the company a laggard in an industry expected to expand by as much as 14 percent.

Margins are under pressure: earnings before interest and taxes fell to under 26 percent of revenue in the last financial year, down from 29 percent in the previous 12 months. One culprit is pricing. Unlike rivals HCL Technologies and Wipro, Infosys is struggling to get paid more by its clients for the work it does at its offshore locations. Making matters worse, productivity gains are falling short of the pay increases that Infosys is being forced to shell out to its 157,000 employees to keep them from jumping ship. The company’s strategy of granting some of its other founders a spell as CEO has also interfered with decisive leadership.

Infosys wants to transform itself into a higher-margin technology consulting powerhouse, but has had little success so far. Acquisitions could help, but in order to have an impact they will need to be bigger than Lodestone, the Swiss business advisory firm Infosys bought in October last year for $349 million.

There is no resource constraint. Indeed, Infosys has too much cash. The company’s war chest is 236 billion rupees ($4.1 billion), equivalent to 17 percent of its market value. Infosys shares jumped almost 9 percent on news of Murthy’s return. One practical way to reward that confidence would be to return some cash to shareholders while Infosys ponders a new growth strategy.

Employees talk as they stand next to flex board poster of Infosys founder Narayana Murthy at the Start-up Village in Kinfra High Tech Park in the southern Indian city of Kochi October 13, 2012

Infosys Ltd., India’s second-largest computer software exporter, announced on June 1 that N.R. Narayana Murthy, who co-founded the company and was its chief executive for 19 years until 2002, will return as executive chairman for a five-year term.
Infosys shares, which have slumped 15 percent since Murthy’s retirement as chairman in May 2011, jumped as much as 8.8 percent in early trading in Mumbai.