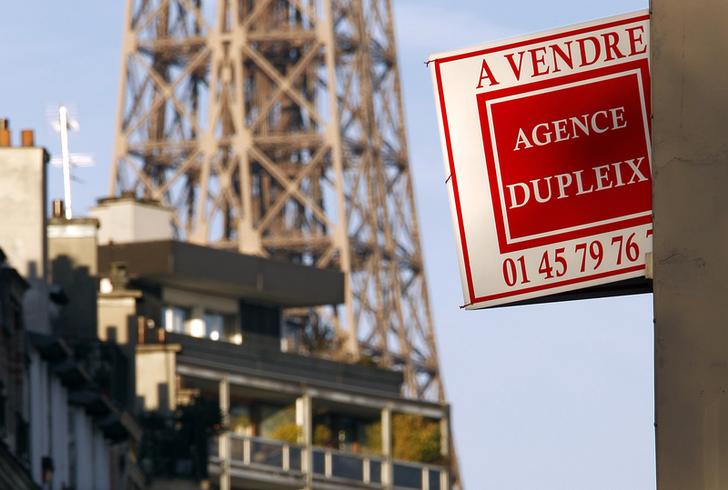 François Hollande could live with a housing bubble. That would at least signal euphoria in a significant part of the French economy. But house prices are declining, a reflection of the depth of the country’s economic woes, and its president’s inability to address them.

Average house prices dropped 1.4 percent nationwide over the last year, and fell 1.6 percent in the Paris region. The decline is uncharacteristic. High and ever-rising house prices have long troubled French governments. But the current situation has nothing to do with Hollande’s policies. On the contrary, his clumsy dirigisme has discouraged new housing investment, thus preventing prices from falling even further.

It would have been worse without declining interest rates. According to industry sources, the average rate on a mortgage is now 2.7 percent, down from more than 3 percent a year ago. Even with cautious banks, as they are now, low rates should be a significant incentive in a country where fixed-rate mortgages are standard. But buyers aren’t rushing in. Parisian flats sometimes can’t find takers, and the few buyers can routinely negotiate previously unheard-of discounts of up to 20 percent.

The government has put itself in the absurd situation of facing both falling prices and a dearth of available housing. When he took office, Hollande gave the housing minister job to Cecile Duflot, a Green Party leader without any government experience. She promptly designed a law that reinstated de facto rent controls, and also created a bureaucratic nightmare for both buyers and sellers of houses.

After Duflot was sacked earlier this year, new Prime Minister Manuel Valls was heard muttering that her law had cut 0.5 percent from France’s 2014 gross domestic product. It would have been better to think about that beforehand.

Hollande is said to be mulling new tax incentives to boost housing. That might help, but not enough to wake up a French economy slowly coming to a halt. The household savings rate is up and companies’ cash holdings – at more than 18 percent of GDP – are about 2 percentage points higher than in Germany or the United Kingdom. This isn’t the mark of a healthy economy governed by sound policies.

A "For Sale" sign hangs outside an apartment on a building near the Eiffel Tower in Paris December 16, 2013.

French President Francois Hollande said in an interview with Le Monde on Aug. 20 that he had asked the government to soon propose a plan to stimulate housing that would include changes to “tax, procedures and financing.”

The number of new houses being built in France fell 20 percent in the second quarter over the same period of 2013, according to French housing ministry statistics.

The French statistical institute said in May that house prices in France had declined 1.4 percent in a year.