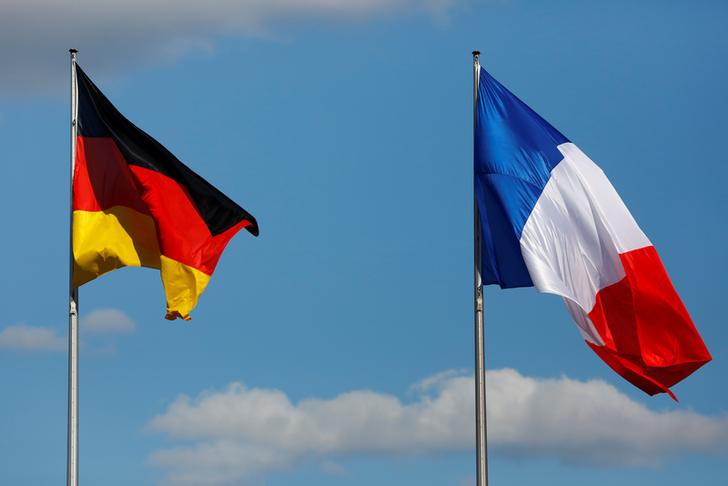 The pair proposed a 500 bln euro fund to help pandemic-hit states. That recognises the need to share the fiscal burden and rely less on ECB boss Christine Lagarde. But market jubilance is premature. Opposition from northern countries means the plan will probably be watered down.

The flags of Germany and France are seen in front of the the Chancellery, before the meeting between German Chancellor Angela Merkel and French President Emmanuel Macron in Berlin, Germany May 15, 2017.

France and Germany on May 18 proposed a 500 billion euro fund to offer grants to European Union regions and sectors hit hardest by the coronavirus.

The plan, set out by the leaders of the two biggest EU countries, said that the European Commission should borrow the money on behalf of the EU and spend it as an additional top-up to the 2021-2027 EU budget, which is already close to 1 trillion euros over that period.

Some northern states of the 27-nation bloc - like the Netherlands and Austria - have opposed offering grants rather than loans. “Our position remains unchanged. We are ready to help most affected countries with loans,” Austrian Chancellor Sebastian Kurz said on Twitter on May 18. “We expect the updated (EU budget) to reflect the new priorities rather than raising the ceiling.”

The euro jumped against the dollar after the press conference by German Chancellor Angela Merkel and French President Emmanuel Macron on May 18. Italian 10-year bond yields fell as low as 1.60% on May 19.